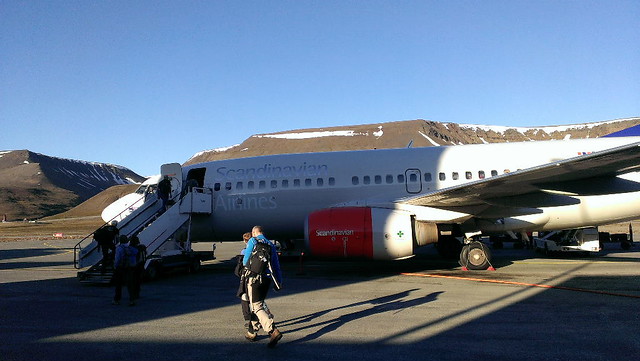 The second part of my journey in Norway is mainly going to Lofoten Islands where is recommended by other backpackers for its beautiful scenery.

Although the local bus also runs in Lofoten island, the bus schedule is not flexible and frequent for me.

If I have a very longer vacation, maybe I will consider it for going to just one day or two places everyday.

Since the holiday is limited and I wish to visit the attractions freely, the only way is to driver by myself.

In order to rent the auto-transmission car, I have to find the car among the big car rental companies such as Europcar, Avis and etc.

The local car rental company may only has the manual cars.

Due to this, I decide to fly to Bodo first to get the car and then take the early ferry to Lofoten Islands in the next day.

By the way, there is also flight to the big town on Lofoten Islands, such as Leknes and Svolvær. 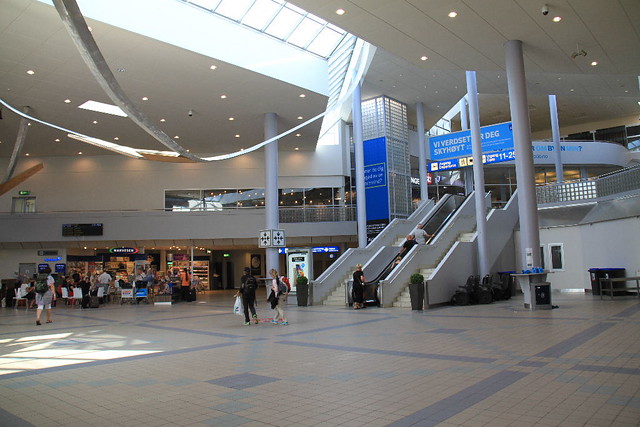 Because the Avis reception in the Bodo airport opens until twelve o'clock, I take the early flight from Longyearbyen to Bodo via Oslo.

The transfer time in the Oslo airport is only 45 minutes.

I have to say that I hate to be hurry for the connection flight but that is the decision under the considertion of getting the car before the noon.

Just as I think that everything goes well as I arrive at the Bodo airport, a terrible thing happens!

My luggage was kept in the Oslo airport...... Why? I suddently realize that I made a mistake for booking this flight.

Though Svalbard seems to be part of the Norwegian territory, it's actually an unincorporated area and also a free economic zone.

In this aspect, the airline to Longyearbyen belongs to the international line.

So, you may know what the problem is. Any tourist transferring to the domestic flight from the international flight should collect his check-in luggages and check-in once again.

Oops, I almost ignore this important rule since I still consider Svalbard as a part of Norway.

Suddently, I recall the words told by Mr.Haruki Murakami, my favorite Japanese writer: "The thing would never goes well according to the plan."

Especially travelling aborad, it's indeed that there is always something out of your plan, though that is also the fun for travelling.

Therefore, if you also want to fly from Longyearbyen to other city, except for Oslo, remember not to do so as me. Even you don't forget to collect your luggage, the transfer time is still not enough to catch the flight unless you don't have the check-in luggage. 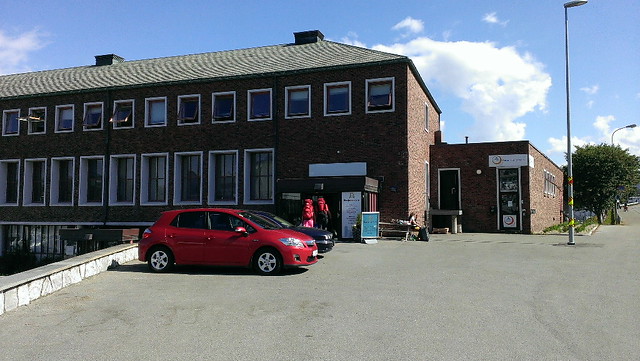 I go to the luggage service center of the SAS for querying my luggage.

The good news is my luggage may be delivered with the next flight from Oslo.

Now I could breathe again for I only arrange one attraction today and the time is enough for everything.

Before my luggage is sent to Bodo, I get the car and drive to the hostel for a short break.

Why I only arrange one attraction today? It's because I didn't drive for almost three years since the driving trip in Tasmania.

Besides, it's also my first time to use the GPS navigation system instead of memorize the maps in my mind.

Tomtom is the recommended brand for this kind of products.

Driving from the airport to the Bodo hostel only takes a few minutes.

I get used to the car quickly and the driving is indeed easy with the GPS navigation.

According to the information, driving in Norway is not difficult.

Of course, there are not only two rules and regulation for driving in Norway. You should read it once for a better understanding. 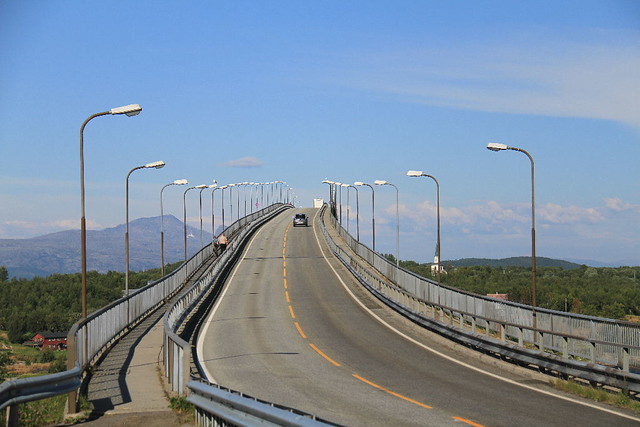 Finally, I get my luggage until 15:30, and I'm ready for visiting the only attraction, Saltstraumen, in a good mood.

Saltstraumen is an attraction near Bodo for its strongest tidal current in the world.

Because I'm still strange with the GPS navigation and choose to avoid the toll road, this stupid navigation guides me to somewhere else I don't know.

Fortunately, I feel something wrong and reset the route and options once again.

Around five o'clock in the afternoon, I arrive at Saltstraumen.

It's easy to find this place for the sign is clear and the Saltstraumen bridge with the steep slope should be very impressive for anyone.

Though the road 17 to Saltstraumen is not on the list but still scenic.

And the bridge is a little similar to the Storseisundet Bridge on the Atlantic Ocean Road for the steep slope.

The Storseisundet Bridge is popularized as "The road to nowhere" and very famous and popular for the tourists.

Even though, I think the Saltstraumen bridge is also great.

Watching its slope, this bridge is just like the air lane that I could drive the aircraft flying toward the sky.

Maybe Norway is such a scenic country that every place, every road and every bridge could be the attractions.

Maybe the bridges like Saltstraumen bridge or Storseisundet bridge are many in Norway but are just not so well-known by tourists.

How do you think about it? 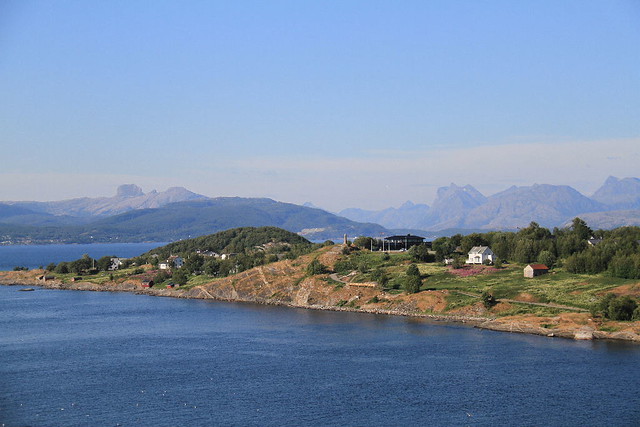 Anyway, after crossing the bridge, you will find a supermarket nearby.

The parking slots are for the customers that is allowed to park for two hours.

Well, it's easy and I indeed have to buy food for the next few days.

Then, I walk upward the bridge to find the strongest tidal current.

On the top of the bridge, the surrounding is amzaingly beautiful.

The elements of the scene may be common...The mountain, the river, trees and seabirds....

But I just feel great in front of this beautiful "Picture". That is picturesque!

Of couse, the blue sunny sky is for sure the key factor. 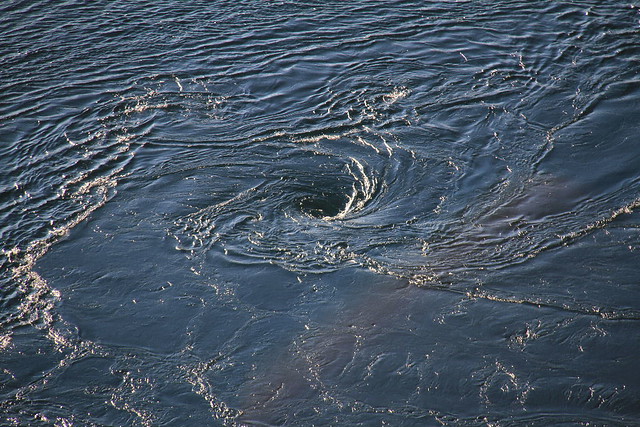 So, where is the whirlpool caused by the tidal currrent? please watch the photo aboved.

The whirlpools appear around the water under the bridge.

Actually, there are fishes in the river but that is not reason for the whirlpool.

The tidal current and also the whirlpools only appear for a period of a day. The information could be found by Google for "Saltstraumen timetable".

The location of the whirlpool is usually random.

How does the whirlpool form in the river?

Basically, the tide is the phenomenon caused by the attraction of the moon, and then the water will flow downhill due to the height difference that is called the current.

Because Saltstraumen is a small strait that connects the outer Saltfjorden to the large Skjerstadfjorden, large quantity of water flows through this trait with a high speed up to 41 km/h.

The great downward power forms the whirlpools, just as the similar phenomenon in your bath tube.

By the way, the direction of the whirlpool is related to the ratation of the Earth. 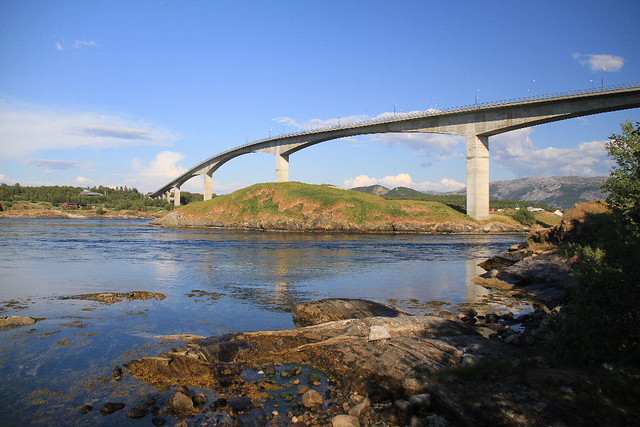 Except for the whirlpools, the bank with the Saltstraumen bridge is also a must-see scene.

Following a small path toward the bank, there is a nice spot for viewing the whole bridge crossing the river.

The surrounding is really nice for sightseeing, finishing or maybe swimming (away from the current).

It reminds me of the scenic bridges in Taiwan such as Kao-Pin Railway Bridge in my home city.

Some photos of it look nice but the beautiful scene only appears at specific conditions (the calm water, the sunset...)

That might depress the tourists coming here in the wrong time with wrong conditions.

Another similar exmaple is the Mirror Lake in New Zealand. The "Mirror" indicates one important factor: the calm water.

So, I prefer the scenery around Saltstraumen. At least, it's easy to came for a visit in the sunny day and the current period is not short.

By the way, the strengh of the current is also different according to the date.

March in the month for the strongest tidal current, especially the days with a full moon. 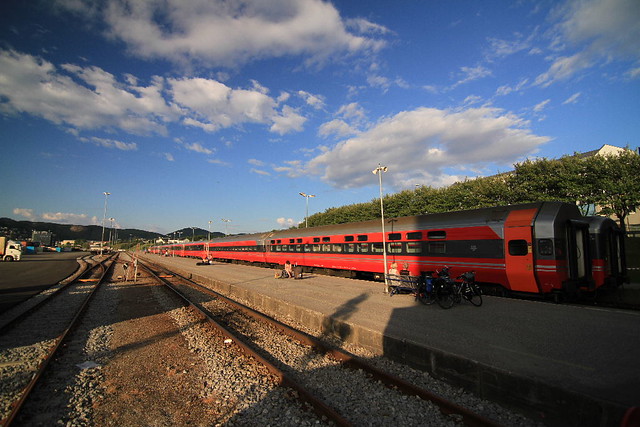 In summerize, it's a busy day today.

Coming back from the arctic, I have to get used to many things: the driving, the navigation system, the delayed luggage...and the hot weather.

Although the temperature here is only 24 degree that should be comfortable for everyone.

However, I just stayed at the Arctical region for more than one week.

The temperature difference is too much for me.

Only the permanent daytime is the same as Svalbard.

In the hostel, I choose a bed with a window that I could watch the sky and prey for the cold air.

This big city may be boring, but you could enjoy the smell of the harbor city....A slight smell of the sea and the fish.

Saltstraumtabellen 2014 (Timetable of the tidal current) 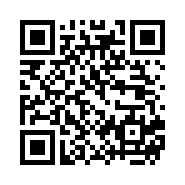