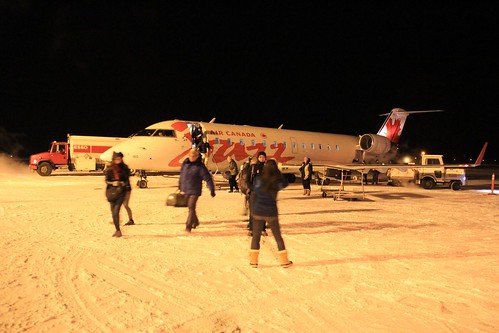 About watching the northern lights, locations and countries are various.

Yellowknife in Canada and Fairbanks in Alaska are quite popular destinations while Norway, Sweden, Finland and other places are also options for northern light watching.

If you prefer challenging locations, Iceland or Greenland are well known for the unstable weather, but would be great while the northern lights are happening nearby glaciers or lagoons.

Besides, Tasmania in Australia and southern regions in New Zealand are the only places where Aurora Australis can be seen.

The places where you can watch the nothern lights are so various that you could choose a different place each year if you loved the northern lights very much.

It's not a boring activity but depends a lot on how lucky you are!

Because it was my first time photographing the northern lights, I chose Yellowknife which was considered as the best place of all. The possibility of encountering the northern lights is pretty high, and I didn't have to worry about transportation around this small town. Driving by myself would have been very dangerous.

Two friends on one of the Facebook clubs joined me and we were ready to go to Yellowknife, the coldest small town in Canada. 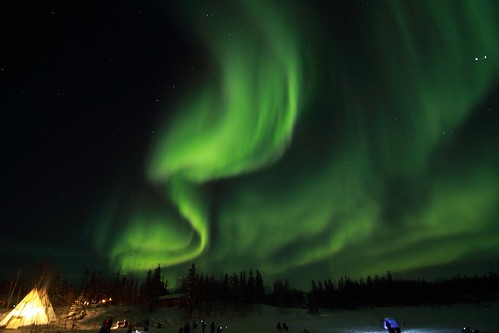 After my private trip in Tokyo, one of my friends and I met at Narita Airport and we flew together to Yellowknife via Vancouver and Calgary.

When we arrived at Yellowknife, it was about seven o'clock at night.

Because it was our first time visiting a place with an outdoor temperature of -35 °C, I put on as much clothes as I could before landing at the airport.

It seemed fine to stay outside for a moment with my own clothing while I walked out of the cabin.

When we arrived at the Discovery Inn, another friend was already waiting in the room.

After a brief dinner at the restaurant in this inn, our first northern lights photographing trip started! 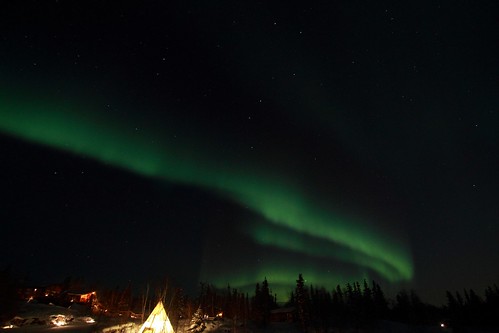 The Aurora Village was the biggest tour company in Yellowknife with their own place for watching northern lights.

The most special feature of their place is Indian teepees that were quite nice as the foreground of the northern lights pictures.

Besides, tourists could keep warm and drink coffee or chocolate in these teepees.

Because of long exposure time, the teepees appeared in my pictures looked like big bulbs.

Some people may want to try using a black card for a normal exposure but it was not so easy for various reasons.

We were quite lucky that the northern lights on the first night were strong enough for excellent photos.

I thought that was our best gift for sure.

About settings for photographing the northern lights, most people usually recommend ISO1600, F2.8, 3600K and exposure time from 8 secs to 30 secs.

Sometimes, you have to modify these settings according to the level of the northern lights you encounter.

If the northern lights are pretty weak (level 1 or 2), exposure time should be longer but less than 30 seconds. 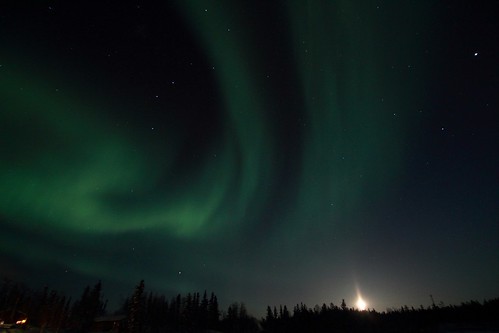 Some people might prefer higher ISO for a short exposure time in order to gain sharp shapes of the  northern lights.

And some people might prefer a small aperture for a clear foreground. (Actually it seems unnecessary for wide-angel lens or fish-eye lens)

However, I thought the quality with ISO over 1600 or 3200 would be pretty horrible, thus I didn't try this.

Maybe when camera technologies advance, we would have better solutions.

On our first night, in addition to the fantastic northern lights, the moon also appeared above the forest and it looked like the sunrise in my photos.

We were both exciting and also satisfied with these scenes we saw.

Though I wanted to try another lens for photographing, it was quite challenging to exchange lens or batteries outside.

After all, the temperature tonight was only -35 °C. 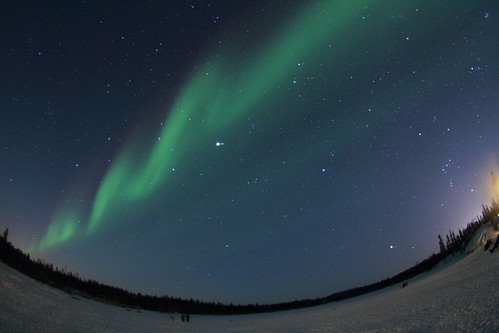 By the way, the winter gear rented from the Aurora Village included a heavy Parka, heavy boots, a snow pants and a boxing gloves.

Although the snow pants are also available in Taiwan, others were not common.

To save the time for putting on enough clothing and keep more space for your souvenirs, I would recommend renting winter gear, especially in the coldest seasons.

However, the "Boxing" gloves were quite useless because I have to control my camera with fingers.

Thus, I wore two pairs of my gloves instead, but my hands were still freezing.

It was fine that every teepee has a stove for tourists to keep warm.

However, exchanging batteries without any gloves was really a tough job for any person.

In just a few minutes, You may lose feeling in your fingers.

Even a cola would be frozed easily outside soon, so you may imagine what might happen to your fingers.

Anyway, buy a good camera for yourself.

My camera was Canon 7D and I didn't have to exchange any battery on the first night, while other cameras lost power in less than 30 minutes.

Besides, a easy-to-use tripod is also necessary for a convenient photographing.

In this way, even I wore two pairs of gloves, I still could take off my camera from my tripod easily, and the tripod mount didn't disturb me while exchanging batteries.

I recommended avoiding these possible problems by preparing good gear in advance.

I tried fish-eye lens on the second night. Although the northern lights became a little strong only for a moment, I still got some pictures.

As for the third night, the northern lights became so weak that we only stayed in our teepee drinking lots of hot chocolate.

Therefore, that is why most people recommended to stay for more than three nights.

You would never know how unlucky you are.

Of course, I had six nights staying at Yellowknife, and it was just the beginning. 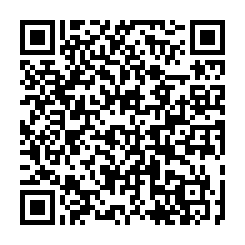