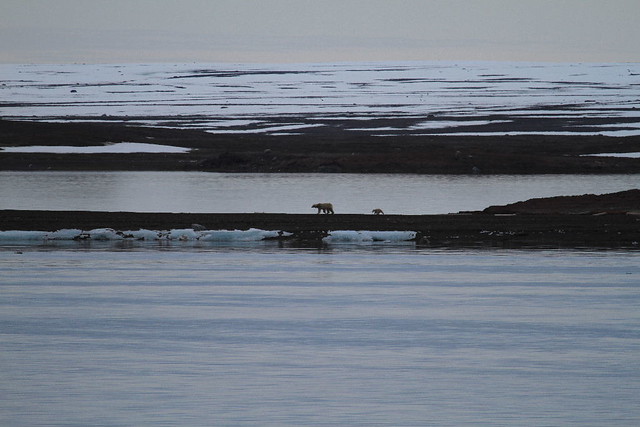 The forth day in the morning, we have already sailed southwards to Monacobreen.

Monaco? You may be curious about it.

In 1906, Monacobreen was discovered and named after Duke Albert I of Monaco.

The Prince Albert popularized the Arctic in polite society with the increasing cruise industry in Spitsbergen.

Before breakfast, we are suprised with the polar bear monther and cub.

I just wonder whether Roie catched this lovely moment for the distance is so far that my lens could not do this job well.

Anyway, it's a great gift before we continue southwards back to Longyearbyen. 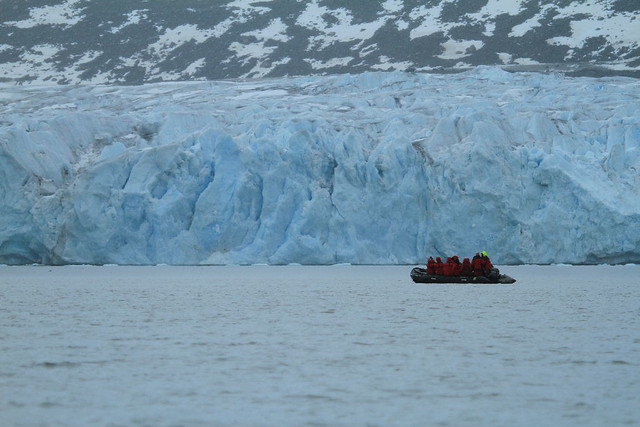 The glaicer is usually rich in wildlife, especially birds.

So we take the zodiac to explorer the surrounding and enjoy the great view of  Monacobreen.

Unfortunately, it's a bad rainy day, though I still go with the zodiac.

I pack one of my camera with the plastic bag as a temporary proof against raindrop.

As for another, I forget to do that in the same way.

If Canon doesn't lie, that camera should be fine even in the rain..... I will tell you later about this experiment.

But it's recommended to prepare a water-proof cover for you camera. 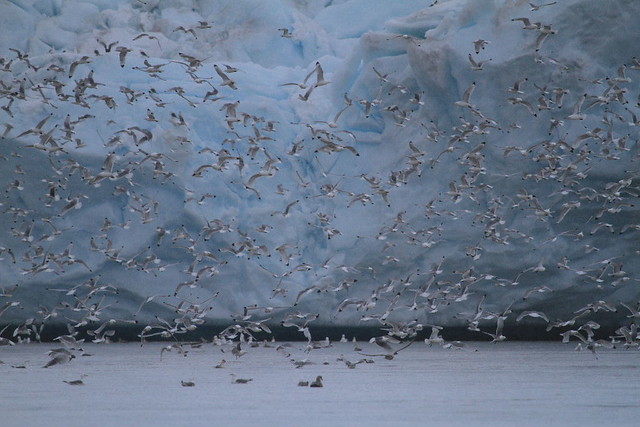 With the red parka given by the expedition and my rain-proof pants, it's fine to do any activity.

The only thing I care is the camera. If the camera get malfunctioned, it would ruin my holiday in Norway.

The basic-level DSLR, such as my old Canon 500D, is quite fragile in the bad condition.

Therfore, I indeed use my camera very carefully in the beginning.

However, photograpging of the bird wildlife is the job of another camera.

Due to lots of kittiwakes and arctic terns near the glacier, I just let this camera get wet for photographing.

There is no empty time to take out and in the camera from the bag.

Although I worry about it, the only thing I could do is to trust Canon.

7D should be fine for the proof against raindrop and dust.

As for the lens, I'm not sure of it. Well, it's the experiment today. 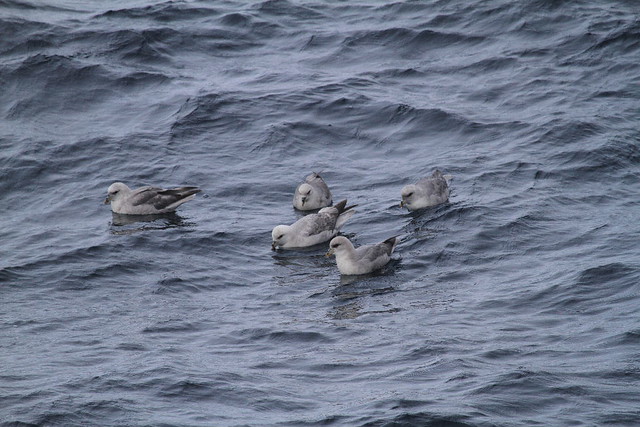 Because the zodiac is moving and the seabords are moving as well, it's not easy to photograph of these seabirds.

Continuous shooting with the good focusing system is the only way in this condition.

Sometimes you will feel like you are really shooting these birds with the machine gun.

You may take thousands of pictures, but only a few are qualified.

Except for the arctic tern, the common seabirds here are two: the Arctic Fulmar and Black-legged Kittiwake.

If you study the species of the Gull, you will get a terrible list of its family.

Some of these species even look similar that I could not tell the differences.

The Arctic Fulmar is uniformly grey. It's said that there is also an entirely white Fulmar but I didn't see it before.

The feature of the arctic fulmar is distinguishable while you see kittiwake and fulmar as the same time. 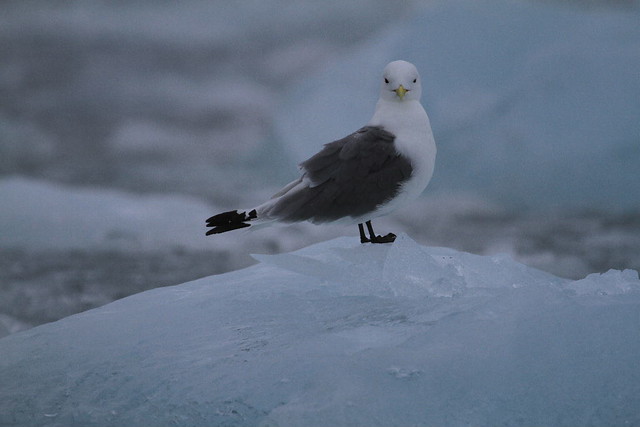 So, the next is Black-legged Kittiwake that is the common image for the gull.

Since there is a black-legged kittiwake, it means that there should be another kittiwake with the legs in different colors.

Some species of the gull are named by its different features of the body, such as the color of legs, the tail, the bill and etc.

According to the animal list provided by the expedition crew, we also see the Glaucous gull. 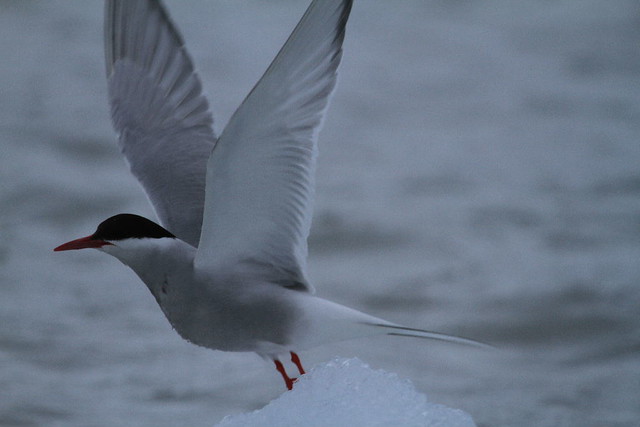 Just as I told before, you may take thounsands of pictures but only a few are qualified.

I don't know what the prfessional bird photoghrapher would do in this condition.

Maybe they prefer waiting on the landscape nearby with their excellent lens on the tripod.

Among all the pictures taken this morning, I only get a few nice pictures of the arctic tern though that is still not perfect.

The wings are cutted because I could not change the focal length in a short moment and the legs are also blocked by the ice.

Trust me! It's hard to catch the flying moment on the moving zodiac.

The only person who could do it is....Superman.

Suddently, I could realize why someone love photographing of birds.

It's hard but interesting, and you will get the great reward while you do it well. 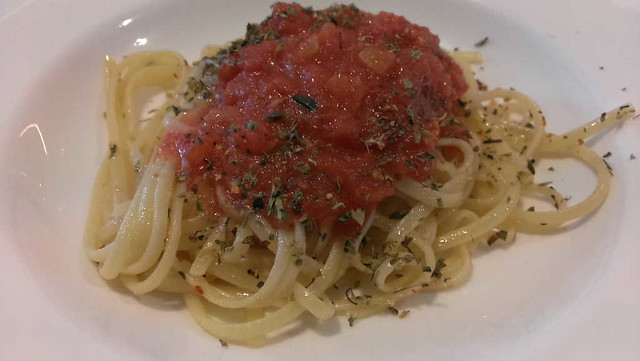 Back to the ship, the chief serves the spaghetti that is simple but delicious.

We sail anticlockwise along the Spitsbergen’s northern coast heading toward Smeerenburg.

At the meanwhile, it also means that we have to say goodbye to the polar bear.

Smeerenburg was one of the largest and best known whaling stations in the 17th century in Spitsbergen.

According to the information, the house and blubber ovens still remain today, and there are also bird colonies such as the little auk.

Unfortunately, the thick fog stops our landing for the polar bear security.

And I fall asleep while waiting the announcement for good news...Obviously, the answer is NO.

Oh！I forget to tell you my experiment of letting my camera get wet in the rain.

Well, the 7D is really good and works well after that.

Oops~~~ I could only wait for it getting dried with the drier.

So, my conclusion is remenber to bring the water-proof cover for you expensive equipments. 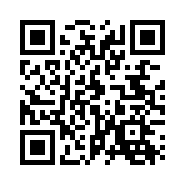