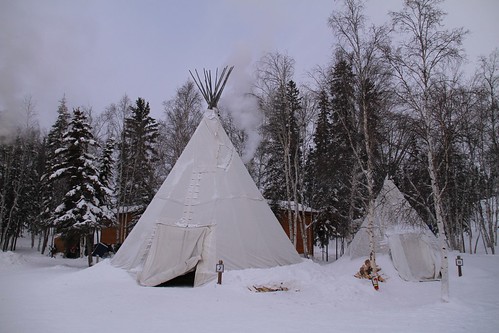 In addition to Aurora photography tours and city sightseeing tours, there are many things for you to do during your stay in Yellowknife, such as snowmobile driving, ice fishing, dog sledding and so on.

Because of my budget, I only chose to only do an interesting dog sledding trip that afternoon.

Some people might think it's wrong to have dogs dragging humans around.

However, before snowmobiles and other technology came to human life, it was a common way for humans and dogs to live together in remote regions, such as the northern territory of Canada or Greenland.

Of course, you could decide to go on this kind of tour or not, but without the income from tourism, these dogs might not live as well as you'd like.

No one can live well without a job, and the same goes for these dogs.

In Greenland, Greenlandic dogs are decreasing year by year due to the convenience of snowmobiles.

Since people don't have to pay for their machines in summer, why should they breed dogs as in the past?

So, don't you think that tourism is the only way to support the lives of these dogs? Of course, they should be treated as fairly as human labourers.

After all, they have not been wild animals for a long history.

As friends and family members of human, it's our responsibility to take care of dogs well.

It's our responsibility to take good care of our dogs, as we would our friends and family members 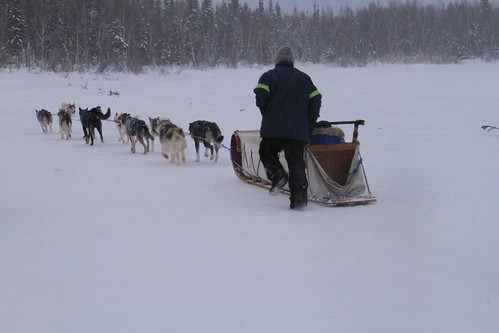 Tourists who take their day trips are usually brought to the village and sent back to the downtown at the same time, so if you only take one trip in a day, you would have lots of free time to spend by yourself.

Of course, other tour agents have flexible choices for you where they will drive you back after the trip.

But I thought it would be fine for me to stay there for a long time because I could take photos around the village. 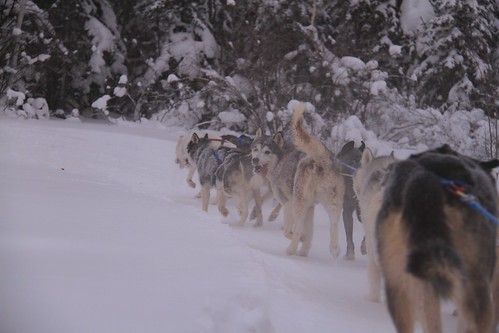 There were ten dogs in the team and not all of them were huskies.

Someone said that huskies are not strong enough for sledding, actually.

No matter what the truth is, I love the handsome huskies.

Besides, while sitting inside the cart, I could only take photos by my intuition.

It was almost impossible to stand up while sledding and it was pretty hard to watch the view finder before taking a shot.

It means that I had to be very familiar with my camera so that I could take photos without watching through the view finder.

I think that is close to a seventh sense for all photographers.

Well, I have practiced this before, and actually some of the photos actually weren't that bad. 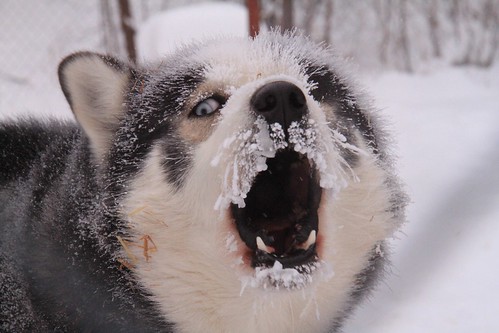 While spending my free time in the village, I took photos of tents, tourists, snowmobiles, dogs and anything I saw.

The temperature outside was cold, even in the daytime.

Because I had the wrong shoes, I had to go back to my tent to warm my feet.

You might want to try your own clothes and winter gear, and some people actually did so.

However, putting on enough clothing usually takes a lot of time.

Therefore, I would recommend renting gear from agents. 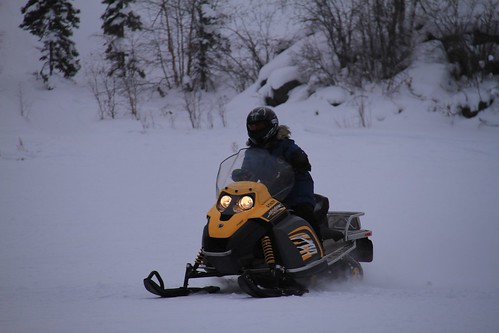 Finally, let us look at some pictures of other activities from that afternoon.

The first photo is a tourist riding a snowmobile.

It must have been freezing as he drove so fast in such cold weather.

By the way, the hemlet he wore looked like it was frozen over with ice on the outside. 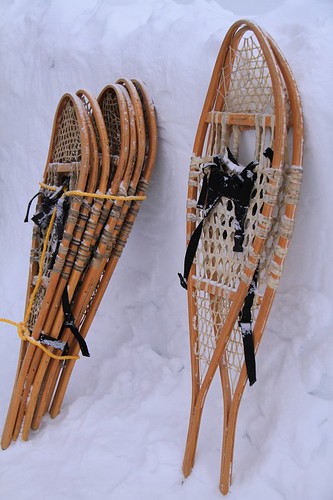 The second photo is of the snowshoes for tourists who wanted to walk in the forest.

These snowshoes are also common in snowy regions of Japan.

If you don't wear them, walking on the snow would be very terrible and cold. 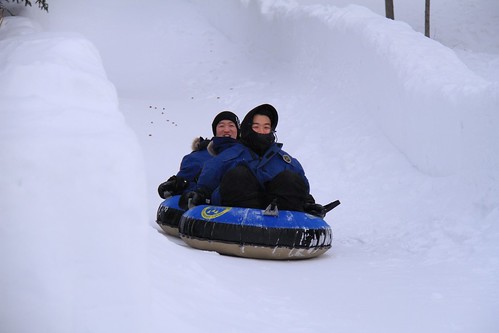 It would be fun if you didn't have to carry the boat back on your own.

Of course, if you don't want to join in, the restaurant in this village is a good place to keep warm.

You could enjoy a hot meal, also the only toiet is in there. 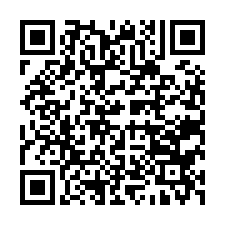