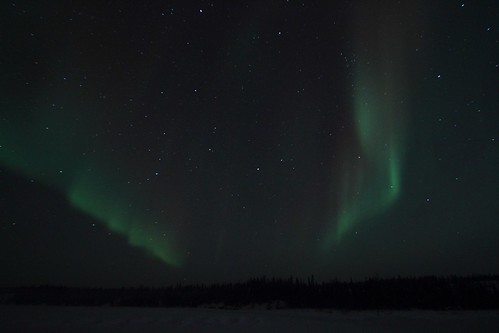 Except when we were in the "Aurora Village" of Yellowknife, we joined other Aurora tour members, driving to various places in the wild.

Though Indian teepees were the great features of "Aurora Village" as the foreground of your photos, there were so many tourists with bad manners using flashlights ot flashbulbs that it was uncertain how our photos would turn out.

I just don't want to mention which country these tourists came from, but the news about their bad manners is already infamous worldwide.

If you need to use a flashlight to photograph an aurora, you should go to somewhere else so that your flashlight will not disturb others.

However, it seems some idiots consider themselves to be special professional photographers and they treat others like dirt.

At Yellowknife, outside of Aurora Village, you could find a few such tours.

Their price might vary,  as well as theirs services.

As for my friedns and I, we chose Yua David, who is highly recommended by many tourists on Facebook. 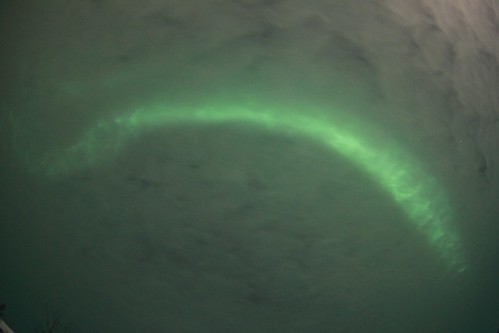 The auroras we saw on the first two nights were weak. It was still possible to take photos but they were not good enough.

I've heard that it's possible to see red auroras if they become very strong (Level 10), but this kind of amazing scene happens only few times in a month. 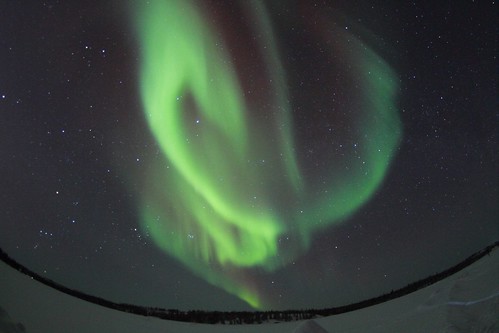 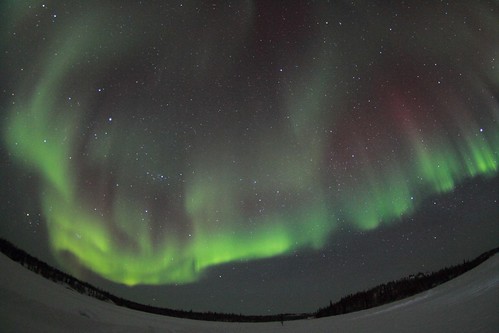 We were quite lucky during our last night in Yellowknife. The auroras were strong with various shapes all night.

It should have been our best gift prior to our departure.

Even without my glasses, I still got some nice photos of the auroras.

As for lens, I recommend fish-eye lens since their angel is much wider than any other lens. They are great for catching spectacular auroras.

If your budget is not a problem, a circular fish-eye would be a perfect solution to take in the whole sky with the northern lights.

Someone prefer aurora photos with a special foreground, such as tents, boats or cars.

Even on the same night, it is fascinating to observe how much aurora shapes can vary.

That is what I think why aurora photography is so interesting. 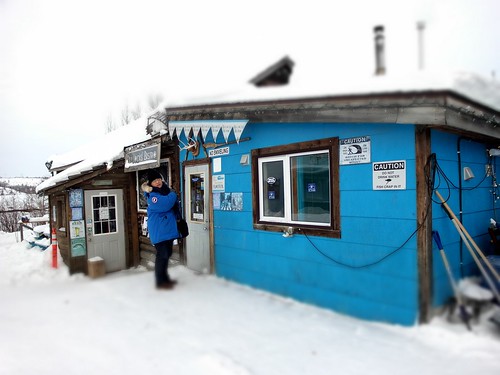 By the way, on our last day in Yellowknife, we went to a famous restaurant, known as Bullock's Bistro, in the old town.

The walls of this restaurant were decorated with photos, business cards, messages and so on.

The meat and fish items on the menu are not always available.

So, we only had the fish as our main dishes.

No matter what you get, the dishes are really nice for sure. They came with home-sliced chips and fresh salads.

The price are a bit steep but it's worth a try.

If you prefer the meat dishes, I guess coming here in summer would be best. 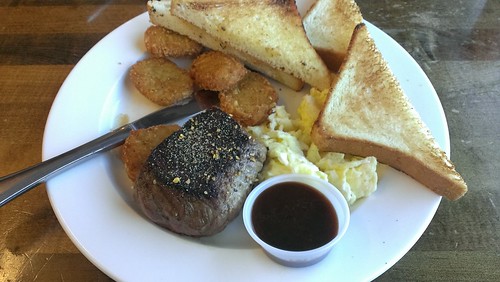 By the way, you may know that tipping is common in Canada and the U.S.

The amount is usually 10% of your bill.

Of course, you could give more or less according to the service.

Some people "round off" their bills and let the food servers keep the change as a tip.

While I enjoyed my steak breakfast at the Calgary Airport, I chose to pay by credit card.

Well, it's amazing that there is an option for giving a tip, and the rate starts from 15%.

It was my first time to pay a tip by credit card.

Hmm....I think I should pay by cash next time.  Though I knew everything is expensive in Canada, a tip of 15% really surprised me.

Of course, tips are important to  support food servers' imcome, and you could choose to pay more if they serve you well. 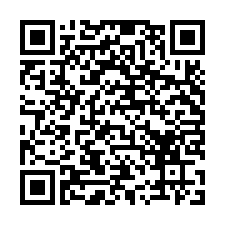