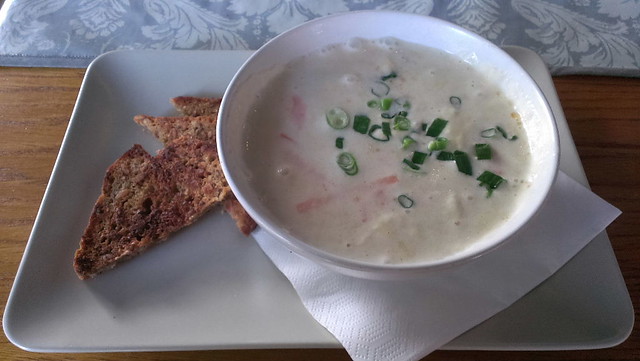 Leaving Geiranger in the morning, I head for Alesund by another route.

The opening hours for the Alesund hostel reception is special and I try to come back to the hostel to store my luggage.

Unfortunately, I wait for the ferry for almost an hour and thus get late for that.

So, the only way is to trust the good safety in Norway and just leave my luggage inside the hostel.

Although it's easy for anyone to take away, there is nothing valuable in my luggage.

According to the hostel's recommendation, I go for lunch in a restaurant, Lyspunktet Café.

Fish Soup, as its name, is the soup stewed with fish, though the fish soup in Asia is different.

Even in the supermarket, you could find the Fish Soup Packets so that you could prepare the fish soup on your own.

The portion of fish soup is quite big as the main dish with some crispy breeds. That is really nice. 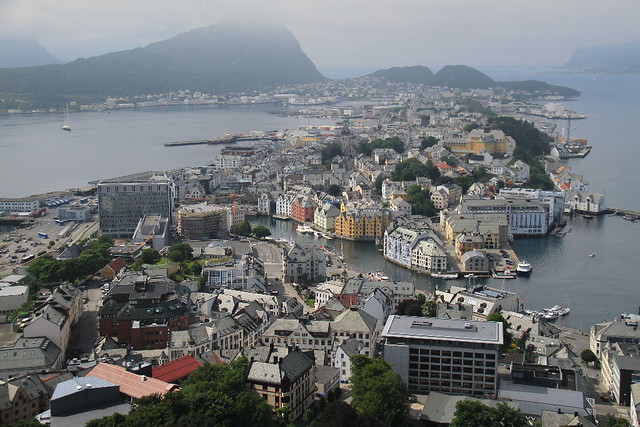 After lunch, I follow the tourist map for two viewpoints in Alesund.

The first one is next to Aalesunds Museum and not far from Lyspunktet Café.

It's a small hill surrounded by buildings.

The scene is just fine so the main point is going to another viewpoint, Aksla viewpoint, on the the Fjellstua Mountain.

The viewpoint could be accessed by car but the route is much longer.

As for walking, there is another way, a 418-step path, upward the viewpoint.

The entrance is at the park opposite to the Alesund hostel.

Even though I've experienced climbing the 1607 steps in Gueishan Island of Taiwan, it's still tiring to walk with a 7kg backpacker and a 5kg camera bag.

Someone even gives me a cheer while they see me reaching to the top with rapid breath.

At this moment, I could realize the feeling for the parents to travel by carrying their children.

But I would recommend to travel with the kids when they could walk by themselves. 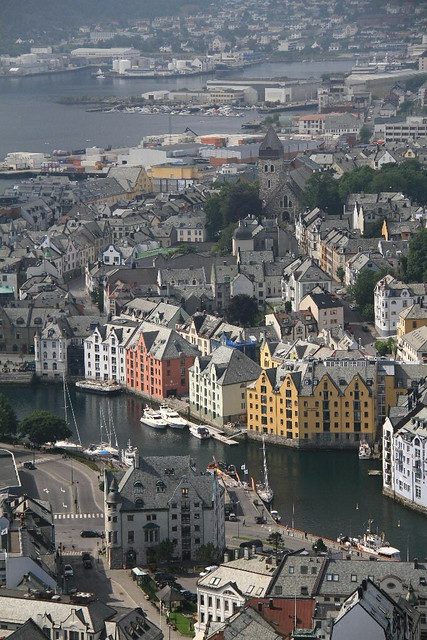 Although the weather today is not so bad but pretty cloudy with fog.

From the Aksla viewpoint, you could watch the panoramic view of the archipelago, the mountains and many buildings that occupy the landscape.

The scene could be better if there is a blue sky today.

The building of Aksla viewpoint is actually the outdoor restaurant with a café and a platform for the public.

I believe that everyone will need a drink or a ice pop after the 418-step climbing.

If you want to get here in a easy way, the Hop-On-Hop-Off tour bus or the lovely city train is worthy of trying. 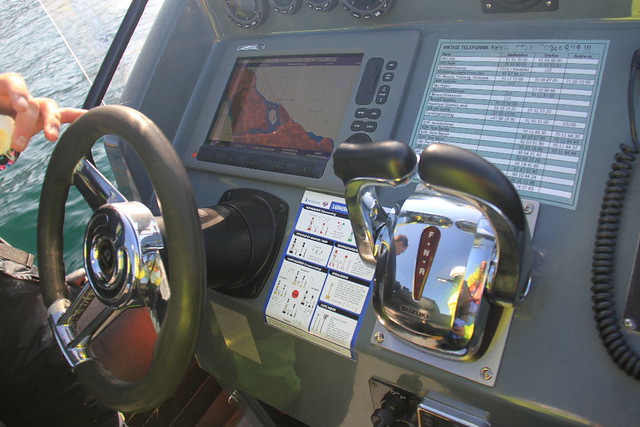 At six o'clock in the evening, I have an important trip is Alesund: Going to Runde Island by the RIB boat.

I booked the trip from Nord 62 and the meeting point is at the Dronning Sonjas Plass.

The reason I choose to visit the Runde island is for the Puiffin and other bird woildlife.

Since I don't like the city attractions, just go for the Nature.

The RIB boat could carry 12 to 13 tourists and it's recommended to book in advance.

Because the boat today is full-booked, I could stand beside the driver.

It's interesting to watch the boat driving and the space is also nice for my camera bag. 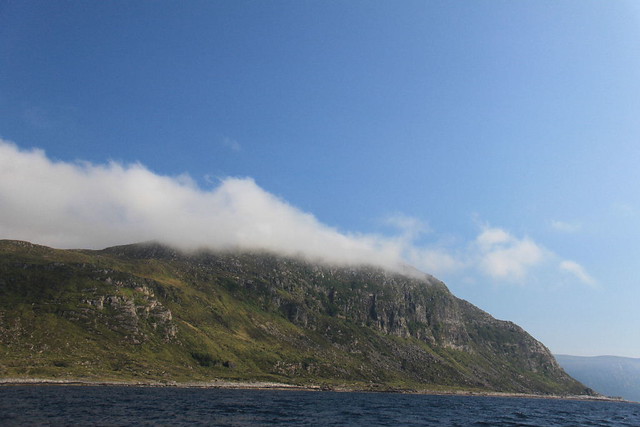 Compared with the sailing on the ship, the RIB bat is faster with the motion of up and down.

I'm not sure whether you would get sickness in such a condition, but it's no doubt that your bottom will leave the seat for many times.

Always remember to hold the handrail and enjoy the high speed sailing.

Runde Island is a famous Bird Island in Norway and could be accessed by car for 2 to 3 hours.

In fact, I would prefer to wait the Puffin on the cliff. It's much easier to get a good and detailed picture of it.

After all, taking photos on the sea is not so easy for the shaking.

However, my vacation is limited, so this trip is the last chance I have.

Between Feb and Aug, it's the breeding season for the birds in Runde Island.

As for the inhabitants, the population is only 102 people.

In addition, Runde Island is also the biggest bird colony in Scandinavia. 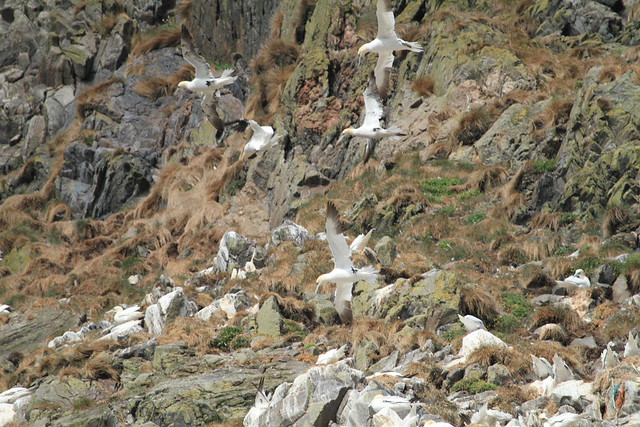 Therefore, the birds you could find are not only the Puffin but also other seabirds as well.

On the cliff, I find the northern gannet that is the largest seabird in North Atlantic Ocean.

The plumage is white with dark wing tips and the color of the head and neck is light yellow.

The feathers are waterproof, so the northern gannet could dive into the sea in a high speed for food (Atlantic mackerel and herring) and could swim as well.

Due to their breading period, the arctic region is not suitable for them to lay their eggs and raise a brood.

As for the south such as Black Sea region, it depends on the prey.

The biggest colonies include the east coast of Scotland,  the south west of Ireland, Iceland and the west (Runde Island) and north of Norway.

By the way, hundreds of seabirds is quite awful.... because it also means hundreds of bird's poos might fall down anywhere. 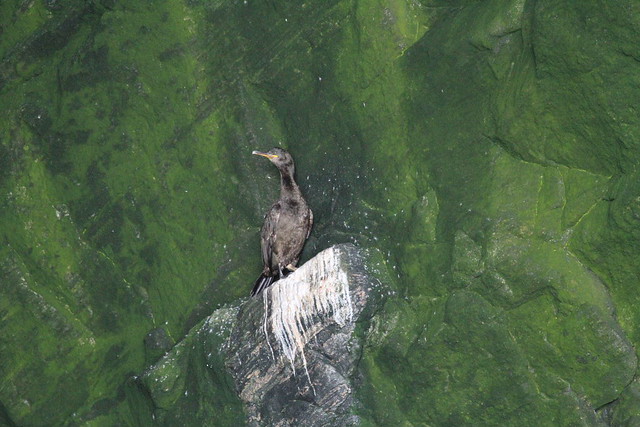 Except for the cliff, we also sial into a cave which could only reached by sea where some seabirds inhabit here, such as the European shag.

The European shag is also a seabird that could dive for food.

It breeds on coasts, nesting on rocky ledges or in crevices or small caves.

The nesting season is also long as the northern gannet.

It's said that it would build the nest with sticks or seaweed adhered by its poo. 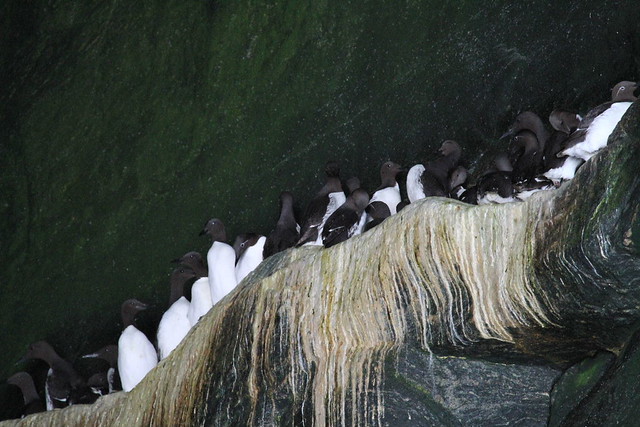 In the same cave, there are also a group of thick-billed murre.

Adult birds are black on the head, neck, back and wings with white underparts.

I also see it before during the Arctic expedition around Svalbard.

For its looking is a little to the penguin, the thick-billed murre is also called the Arctic Penguin.

The thick-billed murre could dive as other seabirds here and it's said that the chick could dive just three weeks after hatched. 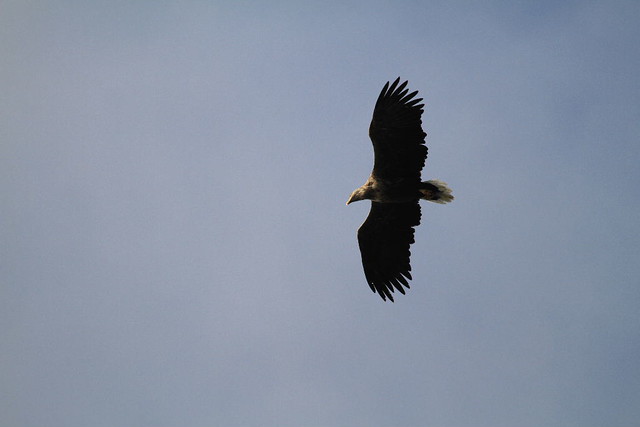 I don't know how many birds in Runde Island.

The scene of hundreds of birds flying on the sky is amazing.

On the sea, some seabirds such as gulls are swimming around.

Just as we're watching the birds, I also find the white-tailed eagle.

It's the rare guest but the coast of Norway is the main colony for them.

Compared with other seabirds, the white-tailed eagle is really big.

According to the infromation, the white-tailed eagle is sometimes considered the fourth largest eagle in the world. 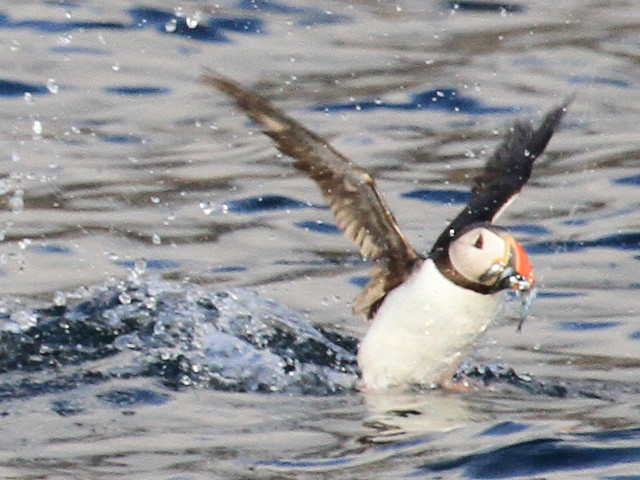 The final and also the most important bird is for sure the Puffin.

It's true that the puffins are numerous in Runde island.

Though lots of puffins swim on the sea, it's hard to photograph of them due to their small size.

Even the boat stops, the sea waves still disturb me.

Among all the pictures I took, only a few pictures are qualified.

I enlarged one of the photos to show you the image of the puffin having some small fishes by its peck.

Maybe I should come back to Iceland again. It would be easy to photograph of the puffins on the cliff in Vik.

It's also said that the Isle of May in Scottland is also a popular place for the puffins.

I think it's also good to arrange a trip there in the future. 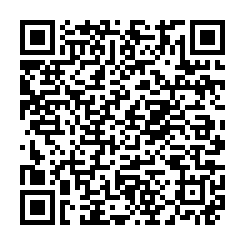