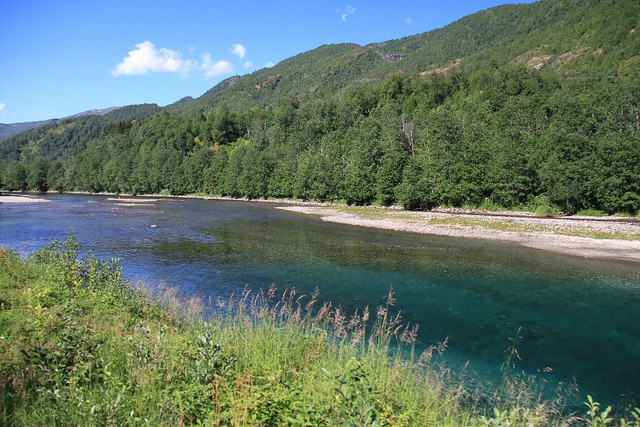 In the early mornign, I take the ferry back to Bodo.

Why do I leave Lofoten so early? I could stay longer here......Right?

The reason is in this web page: Litlverivatnet og til Laksholl

I saw this awsome waterfall and thus I decided to arrange a day for the hiking toward the waterfull, Litjverivassfossen, in the Rago national park.

The information about Litjverivassfossen is not much, and the only hiking refreence is here: Porten til Rago Nasjonalpark - LS#39

Although I have a concept for the hiking route, the time I need is still the question.

Afterr all, I'm not an experiened hiker and I need more time than others.

Even I try to change the schedule for an extra day, it's impossible because the rest part of the journey is important as well.

Anyway, I just want to give it a try, no matter I could reach the waterfall or not.

The path in the national park is quite narrow but it's fine that cars are also few.

Surprisingly, Rago national park is very beautiful with the green mountains and the green river.

This river is crystal green and very similar to another river, Azusa river (梓川) in Japan.

Starting my hiking from the car park, I only have five hours to explorer that is the limit of hiking time in a day for me, unless the weather is cool and there is also water supply along the way.

So, it also means that the actual time for finding the water is 2.5 hours (for I have to return)

Do you think it's possible? The probability is low....

Well, you may watch the map above. The yellow part of the route should what I have hiked in 1.5 hours.

Just when I finished a serial of ascents, I meet a tourist coming to me in another direction.

I ask him about the direction and the time for reaching the waterfall.

Unfortunately, the time is about 3 hours (4.5 hours for me)

Therefore, the conclusion of the hiking toward the waterfall is about 4 to 6 hours one way depending your physical condition.

And the total time is at least 8 to 12 hours. (Sometimes I have to camp at the refuge overnight)

Without enough food and water, I decide to return now.

Back to the car park, the green river is pertty cool for drinking.

If the current is not so rapid, myabe I will considre having a swimming right now.

By the way, if there is anyone who also interests in watching this waterfall, I hope that my information is good for you.

Maybe someone could share his experience and photos with us. 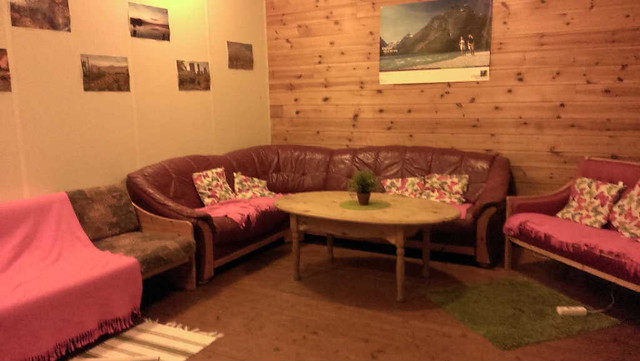 The next day is a boring day flying to Alesund via Oslo, and then I will start my thrid part of the journey in Norway, Geirangerfjord.

Geirangerfjord was listed as a UNESCO World Heritage Site in 2005.

Though there are many fjords in Norway and the fjord tour such as Norway in a nutshell, Geirangerfjord is for sure your only chouice if you vacation is only available for one of these fjords.

Norway is a long-territory country. If you want to explorer all the famous attractions, you may have to arrange at least two monthes.

Spending most of the day on the flight and waiting in the airport, I arrive at Alesund Hostel aorund 8 p.m. 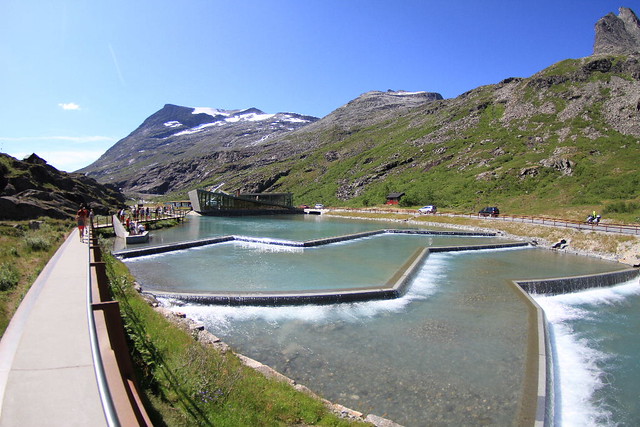 Once again...The next day after arriving at Alesund, I get another car from Europcar and drive toward Geirangerford.

Except for Geirangerfjord, the road 63 is also one of the scenic national tourist routes on the list.

The road signs for road 63 are all attached with the attraction sign.

This route starts nearby Åndalsnes stretching southwards to Geiranger and is devided into two parts by another fjord in the same water territory.

Along this way, there are two section that are very famous and popluar for their nice views and hairpin bends: Trollstigen (Trolls' Path) and  Ørnevegen (Eagle Road).

Most of the tourists may choose to travel by bus, but I prefer to drive by myself so that I could control the time staying in the viewpoints.

Just as driving in Lofoten, Driving in Geiranger is also expensive when you drive alone, but the life is only once. So, Never regreat and Just do it.

The distance toward Åndalsnes is about 118km.

Including the time I get familiar with the new car (Volkswagen) and take a short break in the supermarket, I reach the start point of road 63 two hours after the departure.

The scenery along the road 63 is indeed scenic that makes driving very enjoyable. 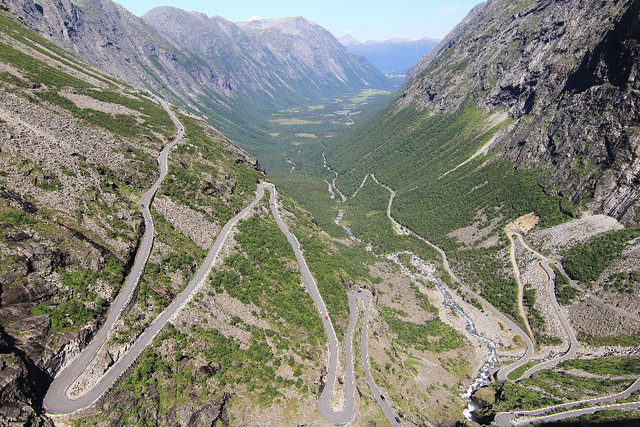 The beginning is easy to drive until you meet the mountain road with numerous hairpin bends.

Yes, the challenge to Trollstigen starts!

The mountain road is not wide so waiting in the meeting space is always necessay and common.

Although the incline is about 10%, that is not so awful than meeting the tour bus in another direction.

Therefore, it's important to notice the traffic in front of you.

If the meeting place is at your side, you have better to stop for a moment and pass the section until you're sure it's safe to do so.

It's also the same with the hairpin bend.

I just wonder why they didn't set any mirror for a better view in such a road condition.

Of course, there is an easy way to drive through the Troll's path: Following after the tour bus, and then the only thing you have to take care of is to keep the safe distance.

Passing Trollstigen, you will find a big car park soon where is the viewpoint for Trollstigen with the toilet, souvenir shop and restaurant.

The car park is quite crowed with numerous cars, campers and tour buses. It's said that the vehicles passing here is about 2,500 per day.

There are two viewing decks for the great view of the Stigfossen waterfall and Trollstigen.

The scene of this mountain road with hairpin bends looks pretty awsome and spetacular.

By the way, Trollstigen is opened from mid-May to October, and the peiod may changed according to the weather condition. 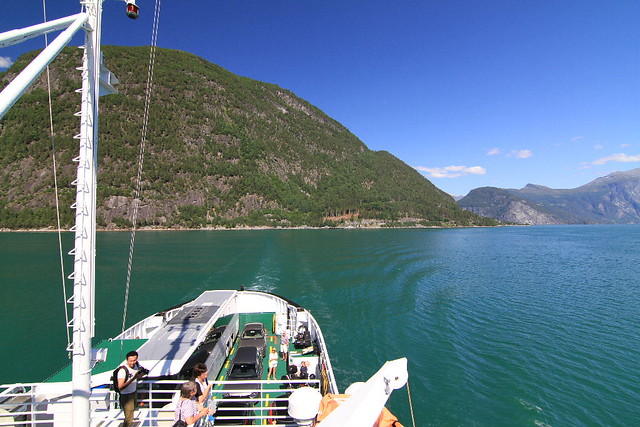 At the end of the road is a small town Linge where you have to take the ferry to another side, Eidsdal.

The second part of road 63 is also scenic with some small village  with strawberry farms.

Many campers choose to stay at the camping sites around here.

The river is clear being surrounded by green mountains. It's indeed good for a vacation. 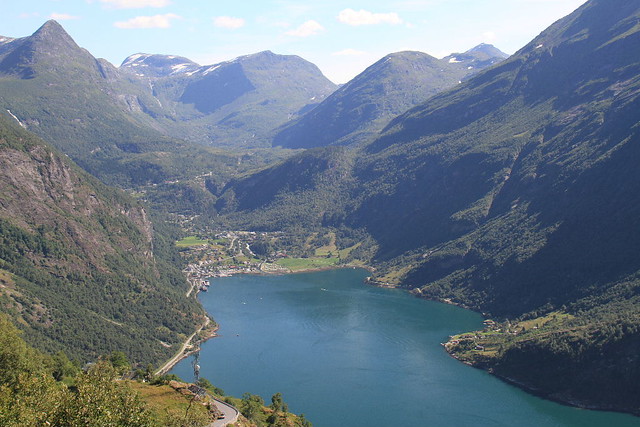 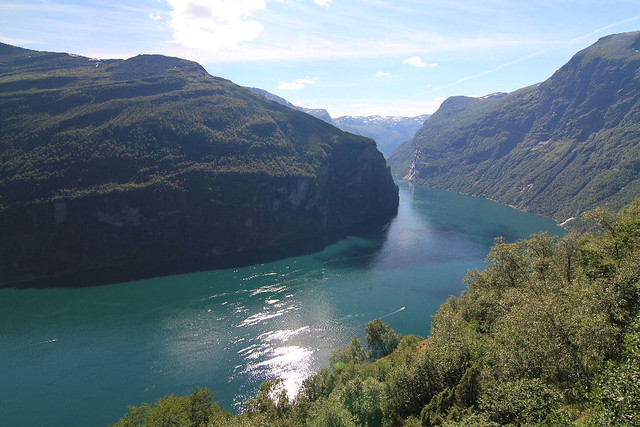 Since I have visited Trollstigen, the next should be Ørnevegen.

So, where is the location of Ørnevegen? This mountain road is reached not far from the town, Geiranger.

More precisely, Ørnevegen is famous for its observation deck for the Geirangerfjord.

The road itself is not so awsome as Trollstigen but could be watched in another viewpoint at the side of Geiranger town.

Because Geirangerfjord is surrounded by grand mountains, the shadow is the troublesome obstacle while photographing.

It's three o'clock in the afternoon now and the sun is about at the south....Yes, The south.

In the area where the sun never goes down, the sun looks like circling over your head from east to south, south to west and west to north continuously.

In this condition, I guess I need the cloud to block the sun for a while....

Even though ths is a good viewpoint to watch the whole Geiranger town and the bend of the fjord with a waterfall far away.

By the way, the previous name of Ørnevegen, the Eagle Road, is derived from its highest point which passed through the domain of eagles.

Maybe you would be lucky to see eagles flying on the sky. 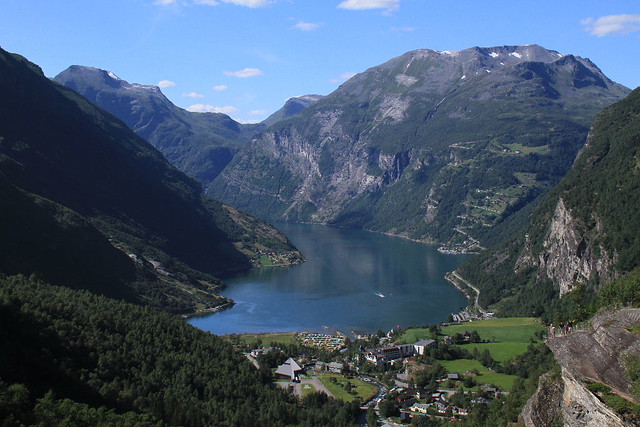 Driving downwards to the Geiranger town, the tourists are crowded everywhere.

The information center, the restaurants, the souvenir shops, the bus and taxi stops and  other facilities are all gathered in a small area.

There is also a big camping site just beside the sea where you could kayak or swim.

Before checking in the hotel, I continue my way toward the viewpoints along the road 63.

The first is Flydalsjuvet that is the most recommended for a proper view of the town and the fjord.

You could also take the tour bus to arrive here.

The viewpoint is separated into two platforms and I think the lower is great and also awful while watching the scene.

It's said that there is a chair called Fjordsetet (The Fjord Seat).

This chair was given to Queen Sonja when she was awarded the Explore prize by Fjord Norway for promoting Geiranger and the western part of Norway. 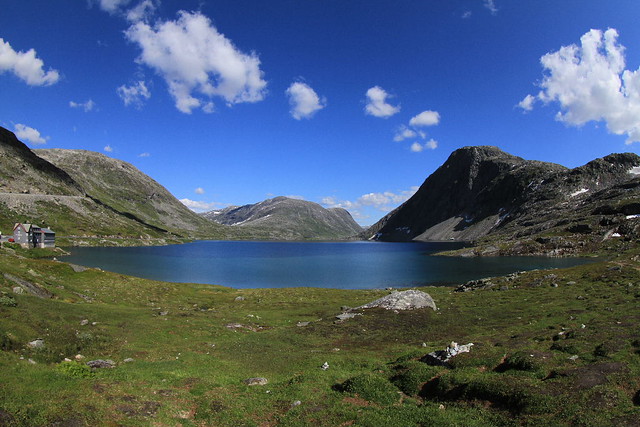 Going further, Dalsnibba is the most highest viewpoint (1476m) in Geiranger.

It's a little far from the town with many bends that is exciting as Trollstigen.

Before the entrance, the beautiful lake Djupvatnet attracts me to stop here for a while.

This lake in the deep blue looks like the Chiaming Lake (嘉明湖) which is a mountain lake in the elevation of 3310m in Taiwan and is popularized as "Angel's Tear".

I think the bus may not stop here so I'm glad I drive by myself.

If possible, it would be great to camp nearby the lake. 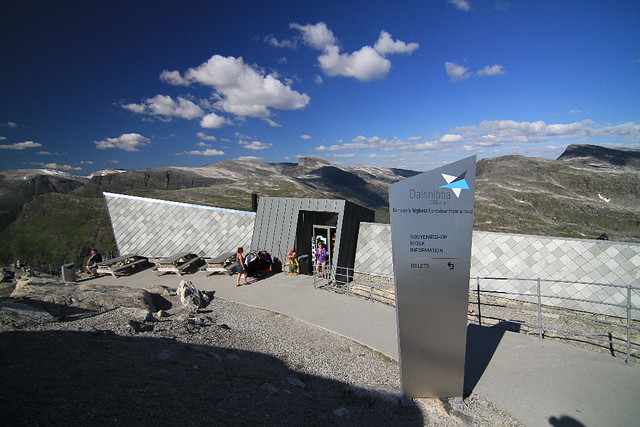 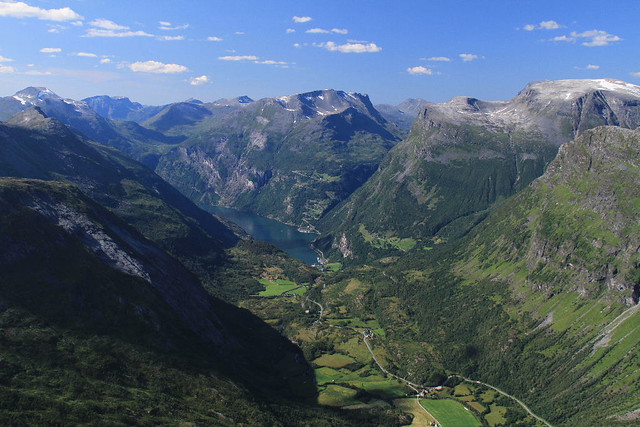 Dalsnibba is not the public attraction for free, and the admission for a car is 100 KOR.

The road condition toward the summit is quite good, so it's worthy of paying such a fee.

Passing the hairpin bend one after another, the elevation become higher.

Suddently, you could numerous lofty mountains around you and some of them are even covered with heavy snow.

The car park on the top is big and there are also the souvenir shop and toilet.

Watching the fjord scene from this position, the town looks tiny with the spetacular valley.

If you are brave enough, you could try to approach the cliff as close as you can.

There is no barrier on the cliff, so take care of your step.

In addition, it's said that there was a running and cycling race that begins in Geiranger town and ends on top of Dalsnibba.

Are you kidding me? It's quite far even by driving. I would never want to run to the top of Dalsnibba. 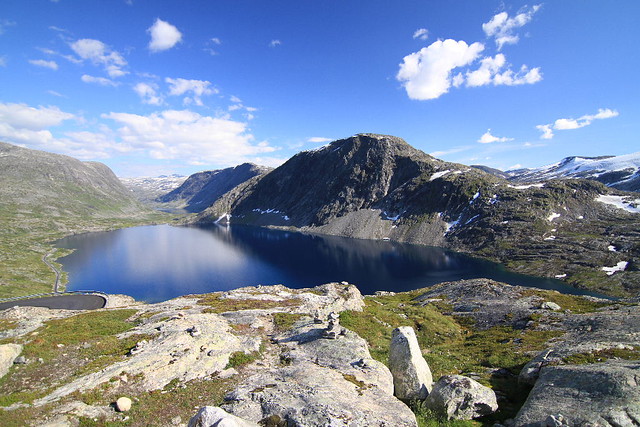 Before returning to Geiranger town, do not forget to stop in the halfway for watching the great scene of Djupvatnet.

The feeling is totally different from watching in front of the lake. 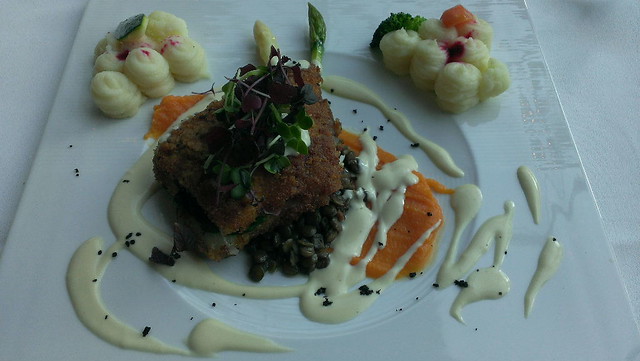 Well, since I have visited all the viewpoints, it's time for a rest in the hotel.

Hotel Union is a well-known hotel in Geiranger for 1300 KOR per night in the single room.

There is a museum opposite to the hotel and so is the waterfall zone.

Therefore, you could listen to the sound of rushing water in your room.

In fact, I'm supposed to camp in Geiranger to save the money.

However, charging the battery and cellphone is an important issue for me.

Besides, I also worry about the rainy weather along the west coast, though the weather today is suuny and hot.

Under such consideration, I choose the hotel as my accomodation.

Anyway, it doesn't matter. It's fine to enjoy, especially the vacation will end soon.

The dinner, I order three courses in one of the restaurants in the hotel. The price is not cheap but I love the leisure and tasty food. 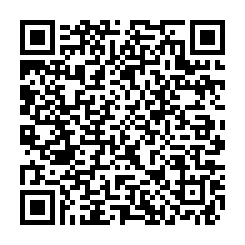