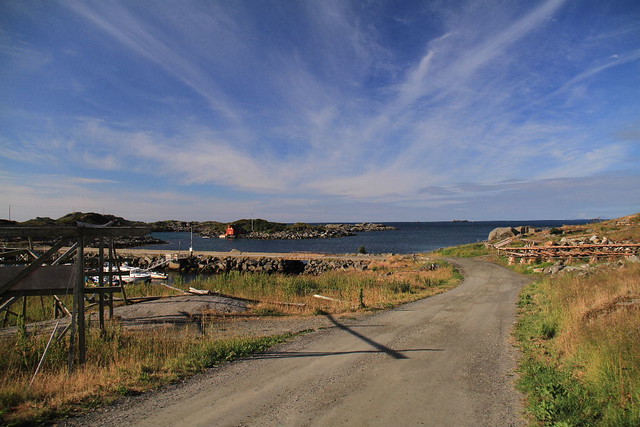 In the morning, I take a walk before the breakfast.

It's lucky that today is a nice sunny day. Thus, I'm quite looking forward the beautiful scenes along the way back to Å.

The road Fv807 is narrow but very scenic just as driving in the background of the film "The Ring".

The cars are few so I arrive at Nusfjord soon. 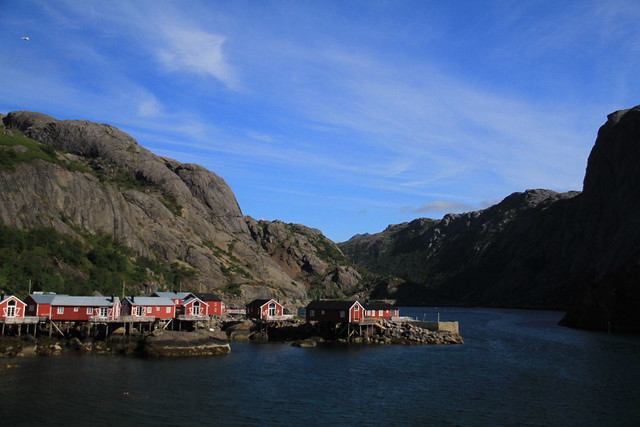 At the mouth of the fjord, Nusfjord is a well-orgnized fishing village for tourism.

There are parking spaces for both cars and tourism buses, and the staff will guide you for parking.

The entrance fee is 50 KOR with a guide map and a brochure.

As an open-air museum, you could look around this tiny fishing village with red rorbuers, fishing ships, dried fished and the sea.

A restaurant, a souvenir shop and the toilet are also avaible in this small area.

Because this village is small, it's easy to walk around for watching the nice scenery.

My favorite is the red rorbuers with the background of the mountains, the fjord and the blue sky.

It's much attactive than any other stuff in the musem. 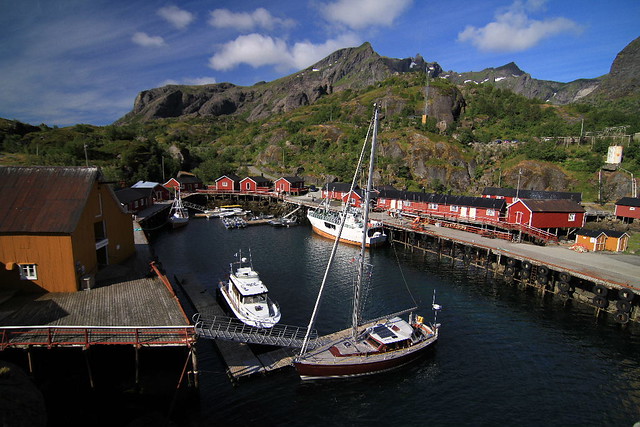 If you wat to stay overnight, the rorbuer is the only option.

Some tourists just leave the rorbuers while I walk toward the hill.

At the end is the museum transformed from the cod liver refinery in the past.

On the hill, you could collect all the elements of the fishing village in just one picture.

Nusfjord is for sure one of my favorite village in Lofoten. 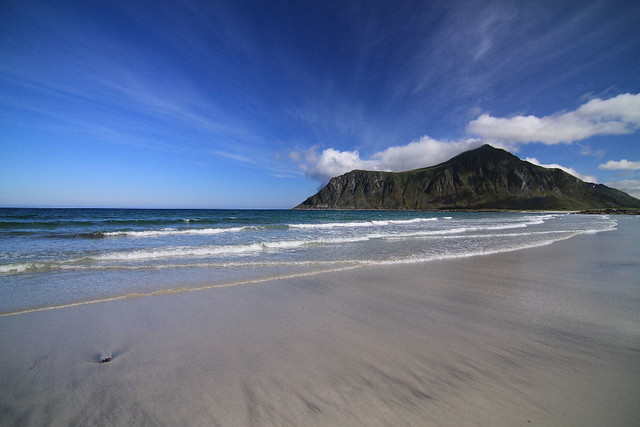 Although it's a sunny day, it doesn't mean that it's good for photographing anytime and anywhere.

While facing the sun, the contrast difference will make all the subjects dark or make the background (usually the sky) over-exposed.

Therefore, I try to visit the attractions when they are still in a good condition for photographing.

Saying goodbye to Nusfjord, the next is the white beach in Ramberg that should be awsome under the blue sky.

It reminds me of the similar scene in Tasmania.

Next to the Scaqsanden Beach is a camping ground with numerous campers and tents.

Someone walks on the beach without shoes. Someone rushes into the sea....

The slight black sand was flew widely with the stream spreading toward the sea.

With the motion of the cloud and waves, the scene is quite picturesque.

Just when I'm ready for the next stop, a Franch backpacker wants a ride to the south. 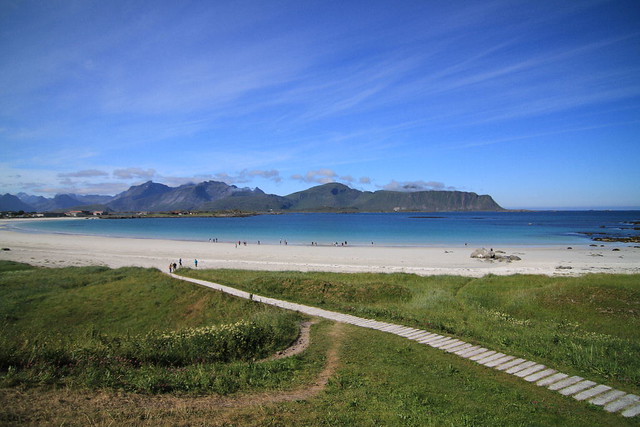 Coming back to the white beach agagin, the scenery is perfect as I expected.

With the blue sky, the sea become blue. That's much better that yesterday.

The advantage to travel with parterners is taking photos for each other.

This Franch backpacker just as another two I met yesterday travels by hitchhiking with the tent.

Maybe they are all young and must control the budget.

I just think whether I have the courage to do so as their age.

Of course, I'm satisfied with my life now. I just wonder it. 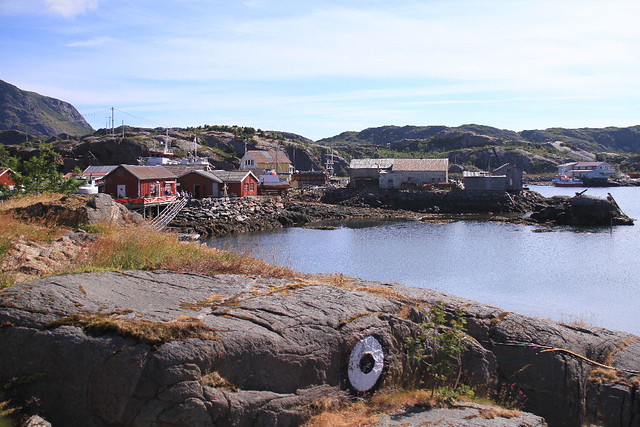 Because of the unexpected partner, my schdule today also becomes unexpectable.

The next destination is the village, Sund.

Except for the Sund Fisheries Museum, the only thing we could do is to walk around this area.

Besides, it's not so necessary to visit the musem in such a great day.

Even though it seems to be boring to hang around the village that looks ordinary.

The Franch says "Maybe you will never visit here again." 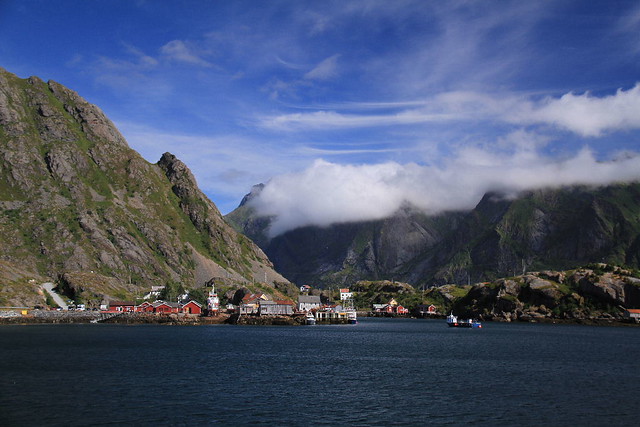 I think the blue sky is probably the magic power to make every place looks beautiful.

Maybe Sund is not so delicate as Nusfjord, the similar scene with the fjord and mountains is also good.

We walk along the path toward the mouth of the harbor.

At the end is a dried-fish factory with the banboo racks for many dried fishes.

This location is a good spot for photographing the village with the nice background. 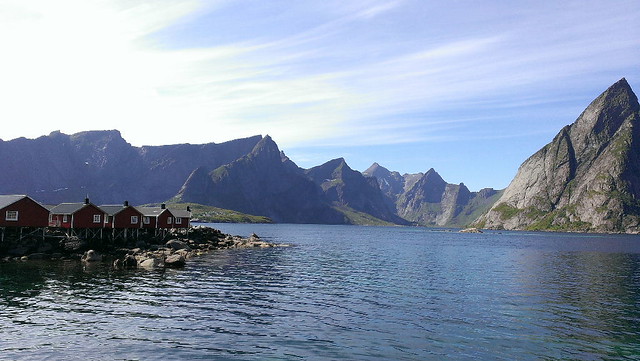 Since it's the pity to miss the attractions along the way, we also have a short visit in Hamnøy.

Hamnøy is also recommended by other backpackers.

And one of the backpackers I met in the hostel Å also came here by bus.

This village is very small and may be smaller than all the fishing villages in Lofoten.

In my opinion, it's not so nice as Nusfjord for the path here is quite limited unless you want to cgo climbing.

Maybe you will get a great view on the mountain side, but that is not what I will do now. 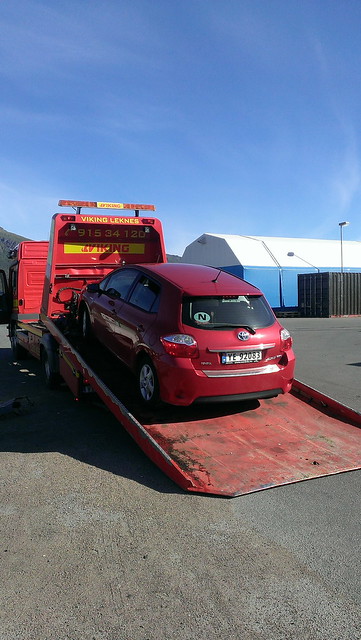 I seems to drive over the sharp stone on the road side as I drive backwards to give away to the cars in another direction.

I should not be so nervious. However, the reality is that one of the tires got punched and I'm stuch on the road.

It's fine that I have the CDW insurrance for the car.

But how to repair or replace the tire is really troublesome. This kind of small car is not equiped with the spare tire.

No matter which village is quite far from here, and sometimes only the big town could I find the car-repair.

I call the phone to Avis. Unfortunately, no one answer for almost five minutes.

Just when I become hopeless on the road side, a Norwegian tourist comes to us and helps me finding the car-repair in Lekenes.

I'm really very thankful for his help. Otherwises, the situation might become terrible.

Because it may take a long time to repair the car in Lekenes, I say sorry and also goodbye to my Franch partner.

He is a nice guy to accompany with me on the road side for such a long period.

I wish that he could find another car to arrive his destination.

On the truck toward Lekenes, I'm thinking: I still lack of many skills to live free in the world.

I don't know how to farm, how to build or repair the house, how to repair the car, how to drive the boat, hot to fish.....

There are lots of things I don't know how to do.

Of course, that is why we need to live in the society and get many helps from other people with different skills.

But I want to become stronger with skills so that I might get the courage and also the opportunity to accomplsih the dream in the future. 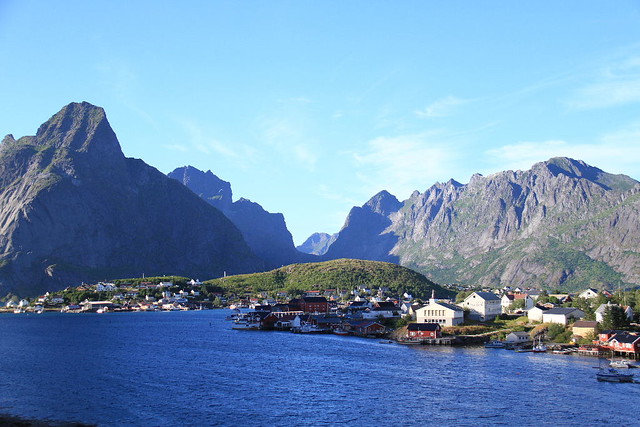 The Viking car-repair arrives here one hour later and carry my car to Lekense.

It looks like everything came back to the start again.

Around seven o'clock in the evening, my car is finally repaired by replacing a new tire.

Departing from Lekenes again, I drive toward Reien under the permanent sunshine.

Although the weather doesn't change and it's still sunny, I miss the perfect moment for the great view of Reine while I arrived.

As the sun moved to the west, the shadow of the mountains at the west would be the obstacle for getting a nice photo. 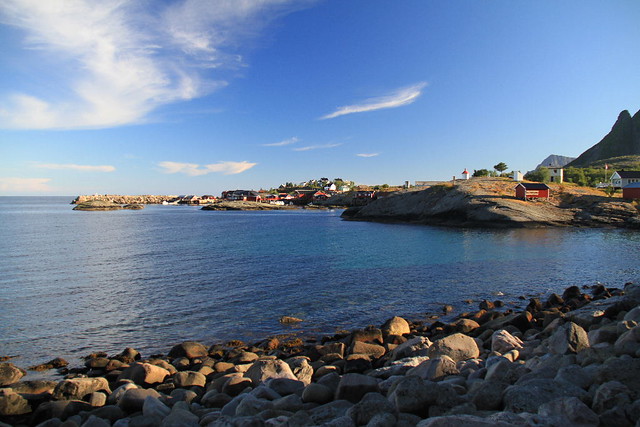 Finally, I come back to Å as the ending of the trip in Lofoten islands.

This time, I stay at the dorm above the musem.

The kitchen is smaller and the gulls flying around are quite noisy.

However, it's good that I could access to the internet in the building.

Walking around the village for the last time, the sea is blue in the sunny day and the scene of this small fishing village is quite nice.

Three days in Lofoten.... I experienced the rainy day, the cloudy day and also the sunny day.

Now, the second part of my journey is reaching the end. 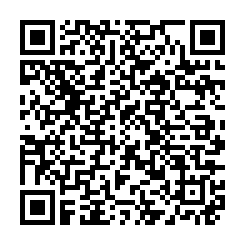