I'm not rich but save hard for travelling, especially the desniation far away.

About the arctic expedition from Svalbard, I've booked one year before with the confirmation letter from the company.

Does anyone book the trip so earily? Yes, I did.

If I have enough holidays, I also want to depart right now.

The expedition is quite expensive, though the antarctic would be more expensive that this.

However, it's the only way that I could see the wild polar bear in its territory, the Arctic sea ice. Although polar bear live in the Arctic and might appear anywhere including Alaska, Canada, Greenland, Svalbard and Siberia.

For tourists, the popular destinations are two.

The first one is Churchill of Canada between the mid Oct and Nov that is the season before the sea ice forms around Huson bay.

Ths trip is really nice because you don't have to prepare the expesive lens for photographing and the budget is also reasonable.

However, the time is a problem for me.

My frined just went to Churchill for polar bears in 2011 and showed me the great photos of bears.

So, if I really want to see polar bears before the retirement, the only but uncertain way is the expedition from Svalbard.

The polar bears for surelu inhabit on the pack ice and parts of Svalbard, but no one know exactly the locations.

It depens on your luck and the expedition company could not promise any bear as well.

Because of the fade of the sea ice in summer, the journey usually takes about one week for explorering the northern Arctic region.

Unless you visit Longyearbyen in winter, it's difficult to find bears around Longyearbyen.

Anyway, I booked the expedition and I'm ready for the trip 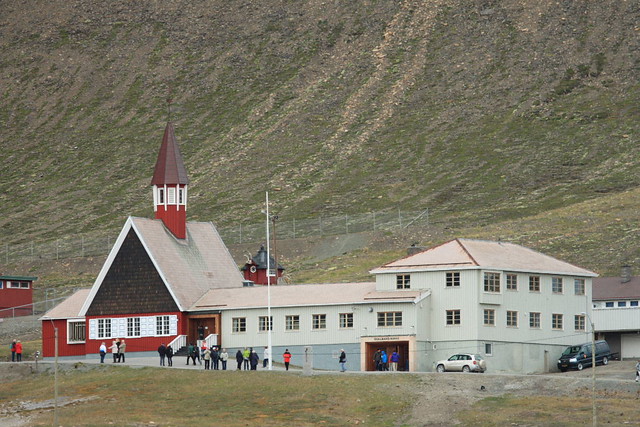 After the breakfast, I decide to call a taxi taking me to the meeting location of Radisson Blu Polar Hotel.

I don't want to drag my heavy luggage walking for 30 minutes.

The taxi company, maybe the northernmost taxi, is Maxi Taxi.

Getting used to the completely English life for a few days, I think I could call the taxi by myself.

You just tell them where you are, where you want to go and the number of the people. It's easy.

Though the distance to the hotel is not far, the taxi fare is much expensive than I think.

The number of the taximeter increases almostly by seconds.

That should the second most expensive taxi I took less than the taxi in Ilulissat of Greenland.

I get my ID card for the expedition and put down the heavy luggage in the lobby.

Before boarding the ship, I join the sightseeing tour.

Well, the driver is just the taxi driver again.

This sightseeing trip takes about two hours guiding you through the important spots in the town and the area nearby, such as the church, the oldest building and etc.

We even see a Svalbard reindeer around the pipe.

It's said that the reindeer is not so afraid of people and sometimes finds for tundra inside the town. 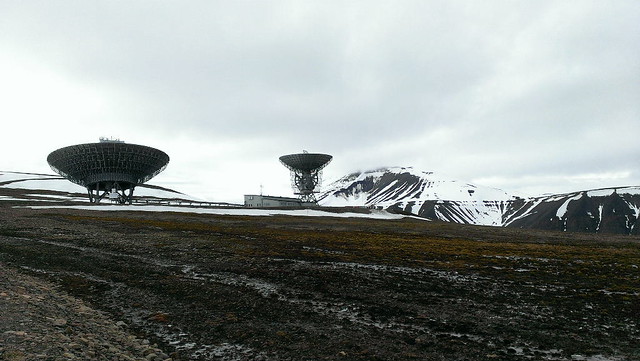 The bus stops at the scenic spots for photographing, such as the polar bear sign at the eastern border.

Passing the old airport, we head to the satellite station on the summit.

Just as I mentioned before, the location of Svalbard is excellent for satellite communication.

Except for the gaint reciever, this location is also nice for viewing the fjord.

The dogyards are also located outside the town.

In Greenland, dogs are bred in the specific areas not far from the houses and puppies might hang around the houses.

However, in Longyearbyen, due to the numerous number of dogs, the dogyards are far from the town. 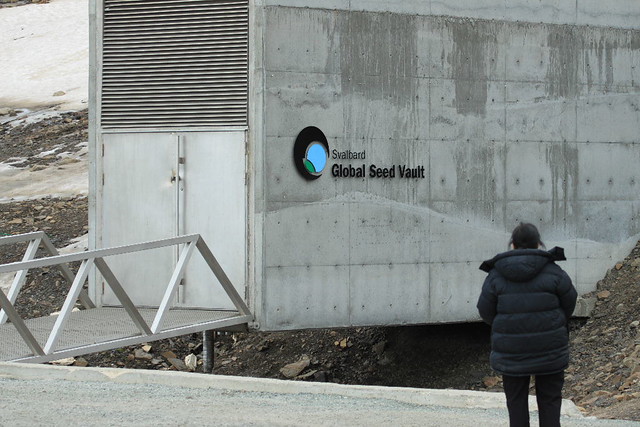 We do not only visit the north region but also the south at the direction of the airport.

There are a old mine as the musem, and the Global Seed Vault.

Global Seed Vault is the seedbank to preserve a wide variety of plant seeds.

Its goal is to insure against the loss of seeds in other genebanks during large-scale regional or global crises.

Simply speaking, it's the Ark for seeds. 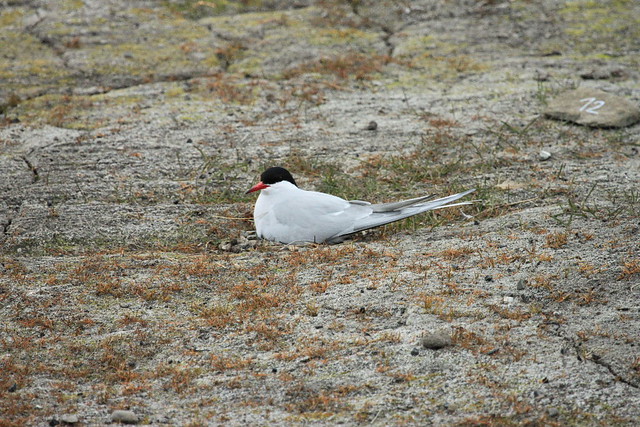 Finishing the short trip, I also know the good location for watching birds.

The eider colony is near one of the dogyard at the north of the town. It's easy to walk there.

Except for Common Eider, you also find Arctic Tern, Barnacle Goose and Gull.

I'm very surprised that the scene I saw in the first day of my arrival is only a small part of the wildlife here.

I think Iceland and Greenland also own rich wildlife, but you may not see just nearby the inhabited area.

The Arctic tern looks beautiful. Maybe you do not know that it's amazingly migratory.

It could migrates along a convoluted route from its northern breeding grounds to the Antarctic coast.

The average annual roundtrip lengths is about 70,900 km to 90,000 km that is the longest record in the animal kindom.

During the breeding season, the Arctic tern is very aggressive, the tourist walking along this area should hold the red pole to avoid being pecked. 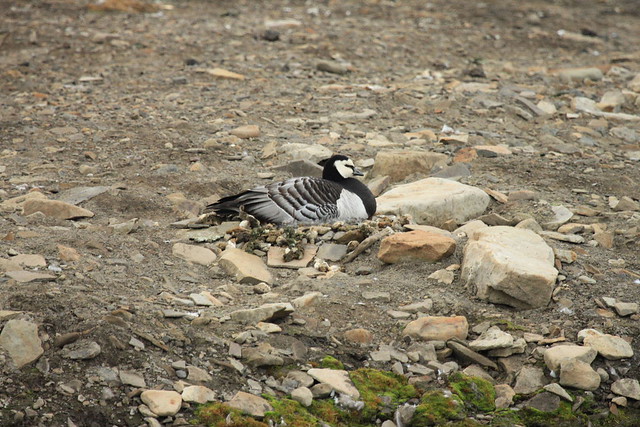 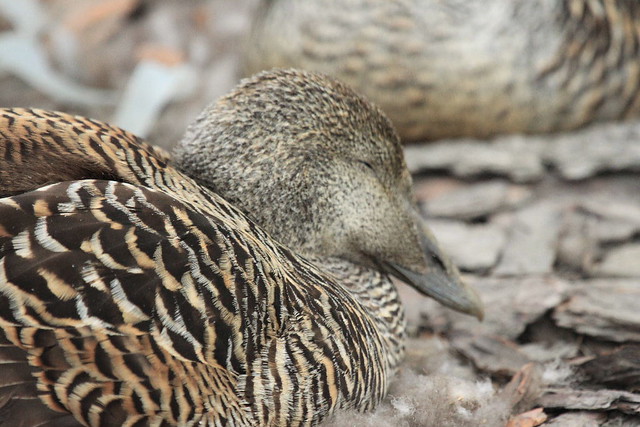 The barnacle geese are also numerous here, including the chicks.

As for the second largest group, that should be the common eider.

The male of common eider has black and white plumage and green nape, while the female is  brown.

There is also an eider specie, the King Eider, much smaller than common eider.

A obvious feature of the male king eider is its multicoloured head that looks like a crown on its head.

In summarize, we might think that the Arctic should be freezingly cold and desolate.

Conversely, the wildlife in this region is so rich that you may not experice in other place.

In my opinion, why the wildlife here is so rich? Because....the human here is few :) 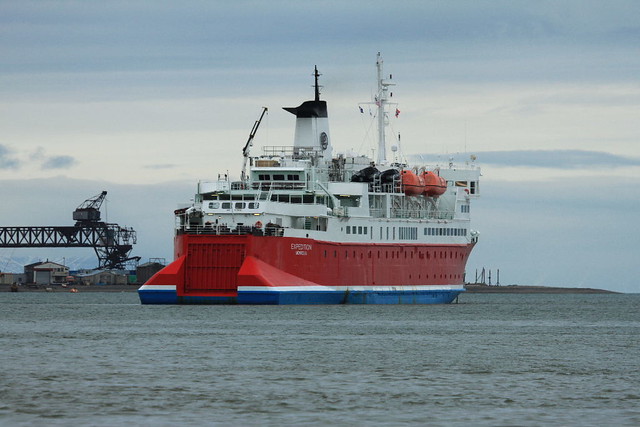 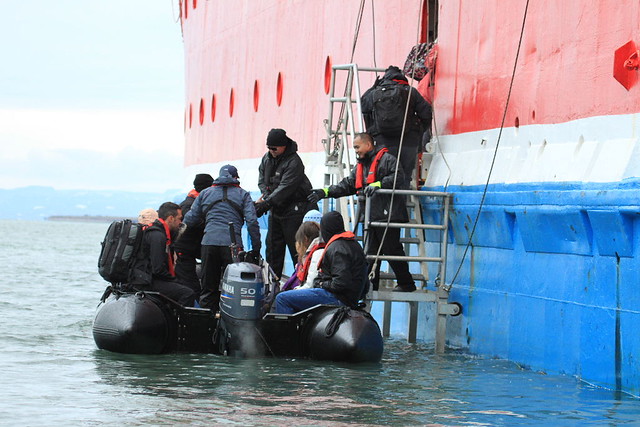 At four o'clock, it's time for boarding the cruise ship.

The big ship parking not far from the harbor will take us exploring the northern Svalbard and the real Arctic.

Because today is the day for preparation, we board the ship by the zodiac and learn how to wear the life vest.

All the landing activities in the next week are proceeded by this inflatable boat. 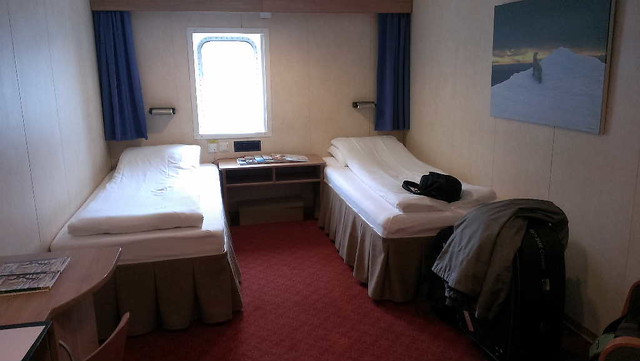 Our luggages have been sent to the rooms which looks nice as in the hotel.

No doubt, it's the most luxury trip I've ever had.

Everyone has his own life vest under the bed and we all have to get the escape training if the ship is abandoned.

Though the crews are professional and experiened, you will never know when the accident happen, especially in the Arctic.

While hearing the long beep, we gather in the Discovery Lounge at 4th floor for the whole precedure. 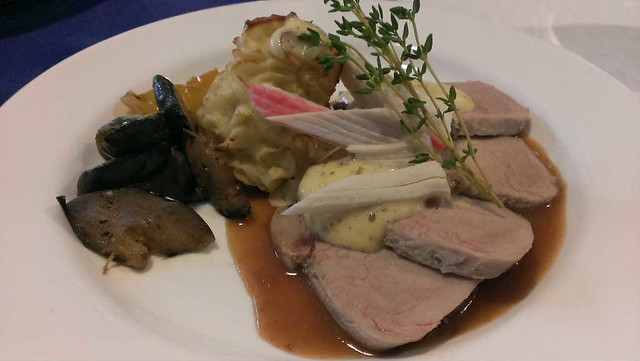 After the escape training, we know the crews of this expedition.

At the meanwhile, the expedition leader Susan introduce how we will explorer the Arctic.

Bascially, there is no specific schedule for everyday. They could not promise any animal and activity.

However, they will do their best to let the guests experience the best and richest expedition.

Well, nature is unexpectable and that is also why nature is so attractive.

The dinner time, they provide two options both for the appetiser and main dish. The vegetarian meal is also served.

Just like dining in the five star restaurant, the waiter is professional and kindly.

I suddently realize why the expedition is so expensive. It's really worthy. 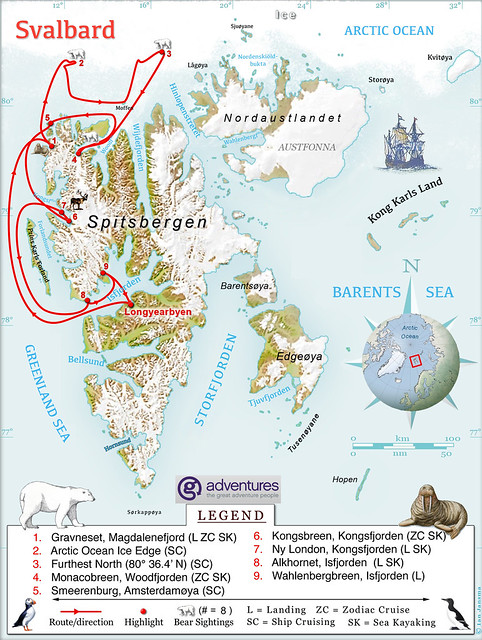 The cruise map showed above is actually done after our trip and is provided by the expedition company.

You could know very clearly about our sailing route, the locations we explored and the activities we did.

The most important is where we find the polar bears.

Only near the Arctic pack ice and the northern Svalbard could we see the lovely King of North Pole.

By the way, you could pay an extra fee for arctic kayaking, but you should be the experienced kayaker.

Because I didn't know this information, I'm not able to try it once.

Realm of the Polar Bear

How to Kayak : How to Hold a Kayak Paddle

How to Kayak : How to do a Forward Stroke while Kayaking

How to Kayak : How to do the Forward Sweep Kayaking Stroke

How to Kayak : How to do the Reverse Sweep Kayaking Stroke

How to Kayak : How to do a 45 Degree Static Draw while Kayaking

How to Kayak : How to do a Stern Draw Kayaking Stroke

How to Kayak : How to do a Static Bow Draw while Kayaking

How to Kayak : How to Move Sideways while Kayaking

How to Kayak : How to Edge while Kayaking

How to Kayak : How to Switch Edges while Kayaking

How to Kayak : How to Not Capsize your Kayak

How to Kayak : How to Wet Exit out of a Kayak

How to Kayak : How to Keep an Active Paddle Blade while Kayaking

How to Kayak : How to Maintain Proper Kayaking Torso Rotation

How to Kayak : How to Separate Upper & Lower Body Movements 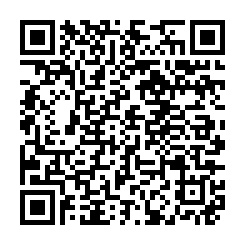