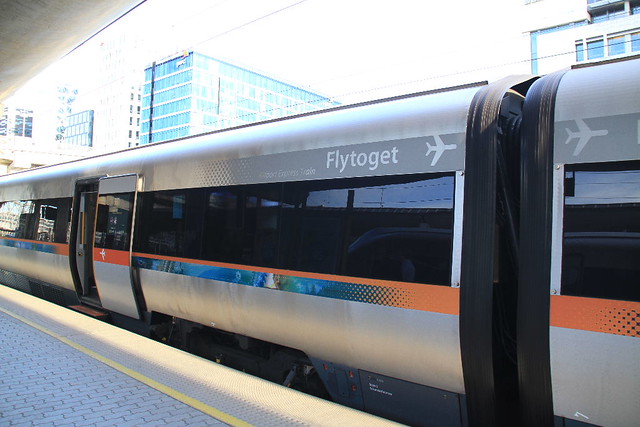 About the dream, someone said thirty is our deadline for chasing dreams.

After thirty, there is no working holiday visa.

After thirty, all the discounts for youngers are no longer available.

After thirty, your elders always ask when you will get married.

If you really got married and bought your own house, you may work hard for your entire life just for paying back for the loan

Seriously, I think of this without any resolution, since the salary is limited and I could not do all I want at the same time.

Choosing marriage for a normal life? Or chasing my dream alone?

I get no answer until now, and I think God also doesn't have an answer for my life.

No matter how you planned for your life, that is only your expection, just as everyone will fall in love while studying in the university.

Unfortunately, I didn't have such an experience, even though I indeed expected before.

That is what I have to accept in my world. 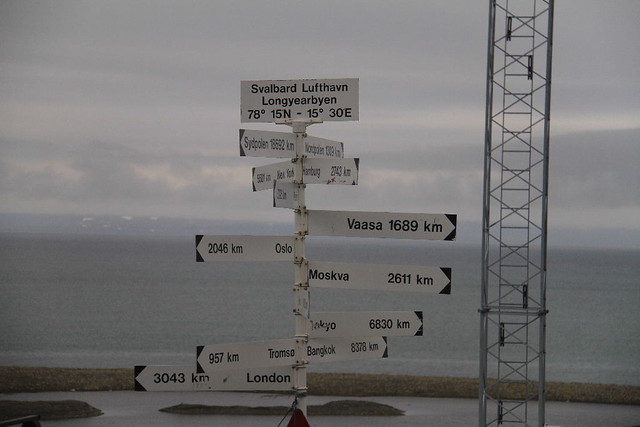 I think maybe my different life experience makes me chasing the tiny happiness without the help from others.

I don't have to be chosed by others and travel is such a thing that I could choose and control completely.

Now, I'm on my way to Longyearbyen.

The latitude of Longyearbyen is 78°13′ North. Compared with Ilulissat of Greenland, I get much close to the North Pole this time.

For someone who is normal but owns a happy family, such a travel would be a dream that might never come true.

However, I just want to tell you. When you envy my courage for travelling, I also envy your happiness. 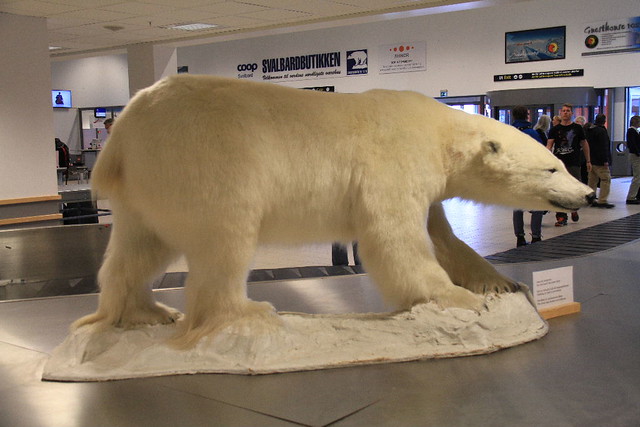 Svalbard, means "cold shores", is an archipelago in the Arctic Ocean, which was discovered by the Dutchman Willem Barentsz in 1596.

Longyearbyen is the main town in Svalbard and also a popular tourism destination for the tourists.

If you really want to know which inhabited town is the northernmost in the world.

The answer is Ny-Ålesund which is located at the latitude of 78°55'N.

However, Ny-Ålesund is a research base for scientists and does not welcome visiting by tourists.

It's my third time travelling inside the Arctic circle.

The first time is crossing the Arctic line on the Grimsey island of Iceland, and the second time is visiting Ilulissat of Greenland for the spetacular icy scenes

I feel quite excited that I get much closer to the North Pole while I fly toward Svalbard.

Maybe I'm not a talent who could travel around the world easily, or even earn the living by the travel business.

Maybe I'm very normal and nameless in the world.

Now, just right now, I know that I really do something I could be proud of.

"Svalbard, the northernmost place in the world"

There is nothing cooler than going to the northernmost place. 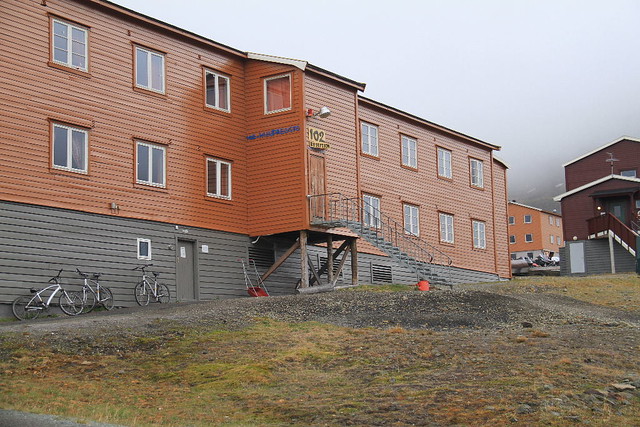 Since Longyearbyen is a town for tourism, the airport bus is running arrcoding to the flight schedule and send tourists to their accommodations.

The accommodations here are not many. Except for two hostels, the rests are the hotels around the main street.

Guesthouse102 is my accommodation before joining the Arctic expedition and located at the end of the town.

On the bus, I watch the scenery for its features.

The landscape is similar to Iceland for the high mountains and grass.

However, the style of houses and some floras are also the features of Greenland.

Maybe the towns in the Arctic share the same characteristic.

Guesthouse102 is very similar to the Ilulissat hostel I have stayed, at where one long hallway connects all the rooms and facilities.

The only difference is Guesthouse102 is a two-floor building while Ilulissat hostel is only one floor.

Besides, due to the tilted wooden floor of Ilulissat hostel, the door lock is not locked easily unless you know its trick. 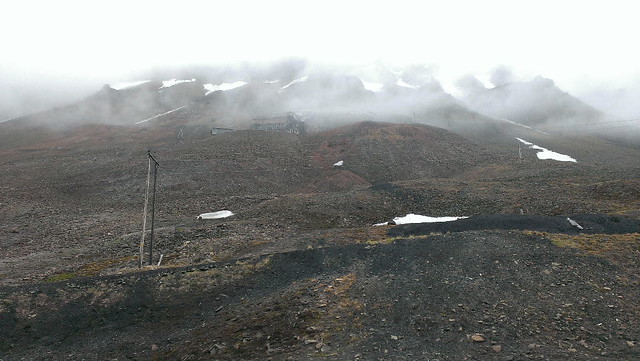 Except for the rich wildlife in Svalbard, this archipelago also owns great resource of coal mine, and was the base for whaling in th 17th century.

Looking at the hillside of the mountains around Longyearbyen, you will find the ruins of the mining in the past.

Only a few mines are still running nowadays for the need of electricity.

Longyearbyen is one of these mining town established by and named after John Munroe Longyear, whose Arctic Coal Company started coal mining operations in 1906.

This town was once destroyed by the German navy in 1943 and was rebuilt after the Second World War.

Not only vital for the tourism, research is also a feature of Longyearbyen.

Longyearbyen owns an university that welcomes students from all over the world and offers high quality courses at the undergraduate, graduate and postgraduate level in Arctic Biology, Arctic Geology, Arctic Geophysics and Arctic Technology..

Besides, due to the Arctic location of Svalbard, there are also satellite stations as the fortune for Norway goverment.

The optical fiber connects Longyearbyen with outer world and that's why we could access the internet in our accommodations. 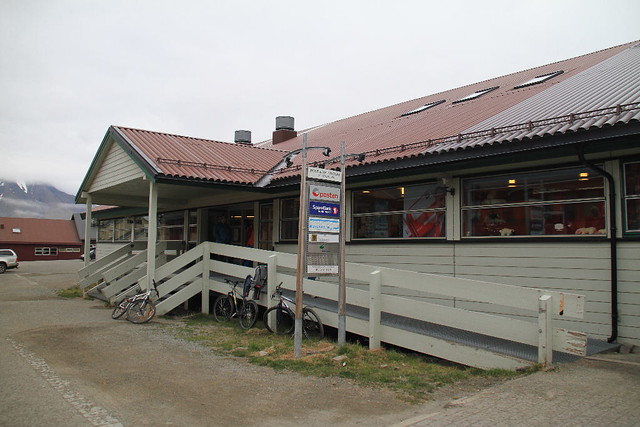 After checking in the hostel, I walk toward the only main street of the town.

The bank, the post office, the supermarket and various shops are all located on this short but popular street.

If your budget is not an important issue, I will recommend the hotel accommodation nearby the main street.

Walking for thirty minutes is not a problem for me but that is still far that you will not want to visit the main street frequently in a day.

My first and important goal here is to mail the polar postcards with the 78° longyearbyen postmark to my friends.

I think it's cool to recieve the postcrd from the northernmost place in the world.

By the way, you could also get a postcard with the postmark right away. Just ask the kindly staff. 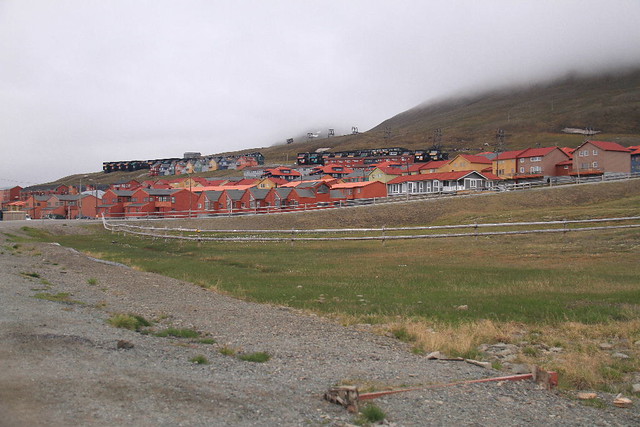 After mailing the postcards, I buy the food and come back to the hostel first.

I really want to call the taxi but just walk with murmuring.

Due to the tiring walking with heavy food and two camera bags, I walk around the town for second time with only one camera bag.

The next goal is to take a photo of the polar bear sign in the halfway between the airport and the town.

Look at the houses again, these houses are very similar to others in Greenland.

Maybe the style of these buildings are all derived from the Nordic. 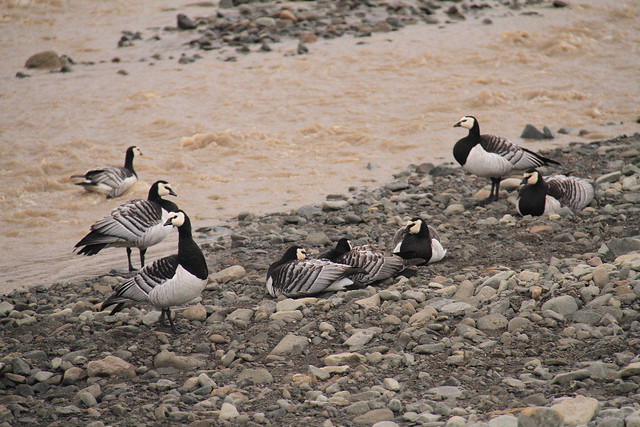 On the way toward the airport, I find a group of Banacle geese along the river not far from the information center.

It's my first time to see so many birds in the Arctic region.

The banacle geese breed mainly on the Arctic islands of the North Atlantic, including Svalbard, eastern Greenland and Novaya Zemlya.

They may winter in Scotland, Ireland and Netherlands.

"Rich wildlife" is my good impression for Longyearbyen.

I think the bird wacthers or photographers would love this town as well. 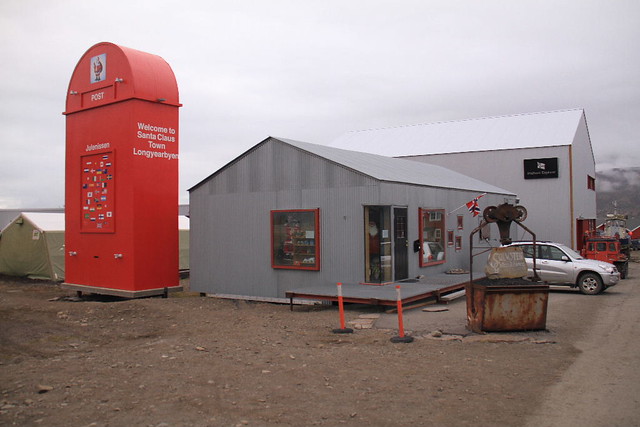 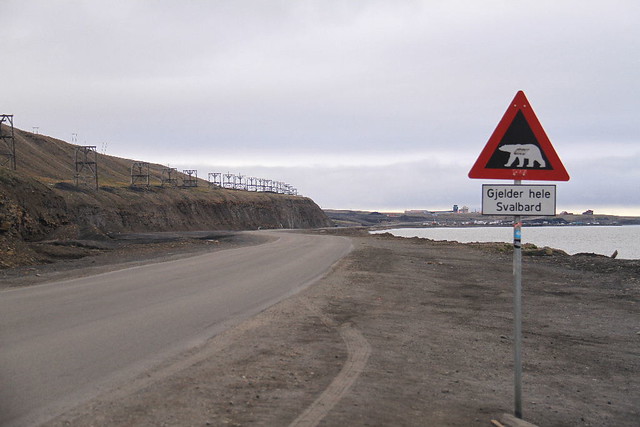 Not far from the river, there is a big postbox just as same as the one in Nuuk.

I didn't visit Nuuk and the big postbox before, so I really wonder which one is bigger.

It would be very interesting if someone pretend to deliver a very big postcard into this mailbox.

I could image what it may be.

About one hour since I depart from the hostel, I finally find the first polar bear sign.

The sign indicates the border for the security area.

People staying outside the security area should bring their weapon for the protection from encountering the polar bear.

As for the term "Gjelder hele Svalbard", it means this rule is for all the Svalbard.

It's said that the polar bears have been to the town in the winter before.

As for summer, the sea ice fades so quickly that most bears move further northward.

However, no one could premise that you may not encounter the bear, so take this rule seriously. 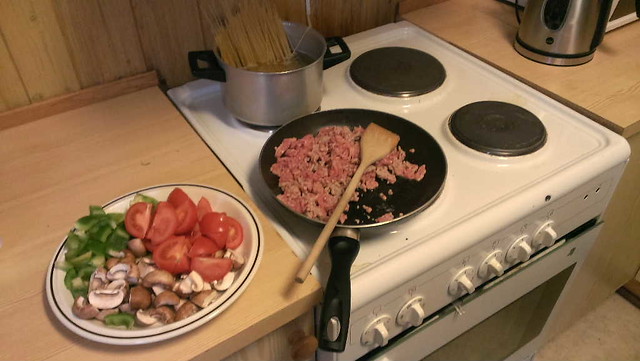 Because the permanent daytime, the time seems stop.

I come back to the hostel at 9 p.m but it looks like it's still the afternoon.

Anyway, it's not a problem for me.

Now, it's time for the dinner.

Cooking by myself is always my interest while travelling aboard, though I always prepare spaghetti.

It's for real that the spaghetti I cook is nice.

Today I cook the speghetti with Mushrooms, sweet peppers, tomatos and mince.

Other guests always say "bon appétit" while I enjoy this big-portion meal.

In my opinion, U.K may spread English to most countries in the world, but Italy for sure spread the speghetti to every place in the world.

Maybe you will encounter someone who could not speak English, but there is no supermarket that doesn't sell the ingredients of spaghetti. 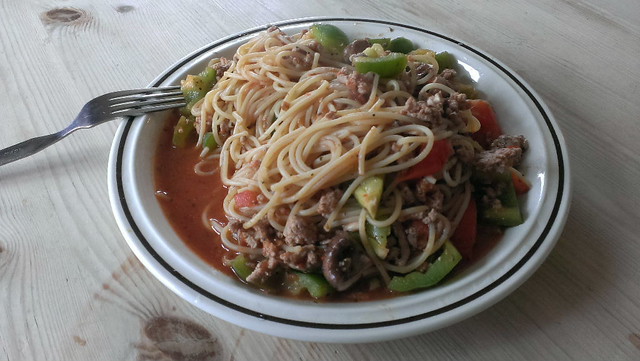 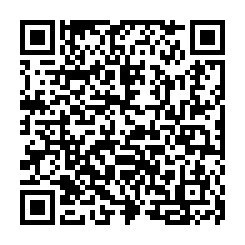